Over the last few years I’ve become interested in ghost signs – old, faded signage for products and businesses that no longer exist. They are intriguing and beautiful in themselves, and present a kind of visual record of social history. Sometimes ghost signs remain bright and clear even after many years, but often they have faded away to almost nothing.

This two-storey Victorian building at 164-166 Melbourne Road, Williamstown, on the corner of Russell Place, provides examples of both. Faded ghost signs are painted on top of each other in layers. Deciphering them led me back to Victorian times, and the underclothing king of Williamstown.

The  signs that are easiest to read are on the Russell Place side. 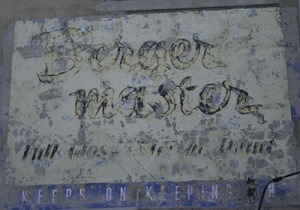 Those that can clearly be made out include Robur (tea), McAlpins (flour), Berger master (paint) and Kem-tone (paint); I think I can see the word ‘Empire’ (cigarettes?) on the lower half of the wall. There are words running along the top of the wall that are almost too faded to make out. I guessed that the building must have been occupied by different shops over the years, grocers and possibly hardware stores among them. The name of the building – which can be seen on that little curved bit at the top (no doubt it has a proper architectural name, but let’s use ‘little curved bit’ for now) is ‘The Beehive, 1889’. The shop has a very functional design, devoid of the usual Victorian ornament. 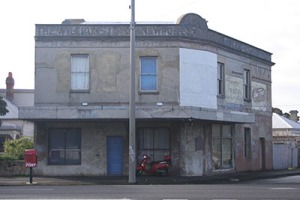 By straining your eyes near the top of the wall that faces Melbourne Road (below), you can just about read the words ‘cheap cash grocer’ below the lintel.

These days the place is occupied by artists, who have created an installation in one of the windows.  One of the occupants told us that the building has been a hang out for artists and rock and roll types since the 1970s. But he’d heard that years ago, the place was a butcher’s shop. 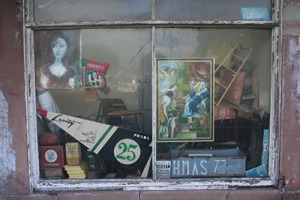 To find out more, I called on the Williamstown Historical Society. Brian Haynes was able to tell me that ‘The Beehive’ was opened in 1889, by Albert Vowles, and was originally known as the Williamstown and Newport Underclothing Depot. Vowles’s previous premises, in Ferguson Street, had burned down in 1888. But he soon bounced back. The (Williamstown) Chronicle of 28 September  1889 – which you can find on Trove – reported “Mr A Vowles notifies that he will reopen next week the underclothing depot at The Beehive, Melbourne Road.”

1889 must have seemed like a good time to open a new business. The 1880s were a decade of economic boom in Melbourne. However, it was rapidly followed by a bust. The 1890s were marked by bankruptcies, bank failures, unemployment. As it turned out, it wasn’t such a great time to be expanding.

If you’re wondering what Victorian underclothing was like, maybe Mr Vowles used to sell garments like this:

When I looked again at the signage on the top of the wall on the Russell Place side, just above McAlpins flour, I could now make out the name ‘A. Vowles’. The preceding word, ending in ‘POT’ could only be ‘Depot’. And then I realised that the faint traces of the words ‘The Williamstown and Newport Underclothing Depot A. Vowles’ ran, barely discernibly, all the way around the top of the wall.  By now this ghost sign is 125 years old.

Searches of the address through successive editions of the Sands & McDougall directory revealed that in 1900 the Underclothing Depot was still going, so Vowles must have survived the economic crisis. A pragmatic businessman, he diversified: by 1910, The Beehive was also a grocer’s shop, still under the ownership of Vowles. But by 1921 it had changed hands, and was owned by ‘Burgess,  grocer and dairy produce.’  The Williamstown and Newport Underclothing Depot was no more.

Over subsequent decades the premises became two shops. No 164 alternated between grocer’s and boot repairers, while from the late 1920s to the mid-60s, No 166 was a butcher’s.  No one seems to have stayed in either shop for more than a few years – perhaps it was harder to make a go of it in that location, closer to Newport than Williamstown. After the mid-60s, both premises were listed as ‘not available’. Some time after that, the artists and musicians moved in, and the place took on another new identity.

The AIF Index website, which lists Australians killed in the First World War, gives 164 Melbourne Road as the address of  Charles Brook Burgess. Perhaps he was the son of Burgess who ran the grocer’s shop. In April 1918 Charles Burgess was killed in action in France, where he was buried. His occupation was ‘sign writer’.

Did Charles Burgess, I wonder, paint some of the older signs on the building – perhaps ‘cheap cash grocer’, or even ‘Robur tea’? I’d like to think that some of Burgess’s work survived his untimely death.

When the English poet Edward Thomas was fighting on the Western Front, “he looked north and saw, or dreamed he saw, Sussex with her gentle downs”. Perhaps Charles Burgess dreamed of The Beehive.

This shop must have played an important part in the lives of many thousands of Newport and Williamstown residents for almost 100 years. How many Williamstown and Newport folk had Vowles’s undies in their dressers? And for much of that time, even as the names of new products were painted onto the walls – Kem-tone, for example, was popular in the 1950s – the name of its founder, the underclothing king Albert Vowles, looked proudly down on the passing traffic of Melbourne Road.

If you remember the Beehive, or know something about any of the people mentioned, please leave a comment or email me.

If you liked this story, check out our other stories by suburb.