This blog isn’t just about ghostsigns, architecture, and quirky tales of local history. It’s about an experience of the whole city – including the areas that might not be thought of as attractive for a recreational walk. The most unprepossessing parts of town can be as intriguing as any other. With this in mind we walked through the Port Melbourne industrial zone and headed towards the Westgate Bridge.

First, though, we said farewell to historic Port Melbourne by walking out onto the  old Princes Pier. This pier and the gate house have recently been restored and reopened to the public, and in the process of renovation a  series of timber posts, that supported the original pier, have been revealed. They are now visible, several hundred stumps rising from the waves, like a piece of modern landscape art.

The waterfront along Beach Street has been developed in recent years and is crowded with crap generic apartment blocks of the kind you see along the waterfront of pretty much any coastal city in the world.

More interesting are the two white light houses at either end of Beacon Vista. Built in 1924, they served as navigation aids for ships steering their way into the bay, and are still in use today.

Nearby, under the Graham Street overpass, is a gallery of street art which we stopped and admired for a while.

We walked up to Williamstown Road, turned left, and headed west. On the corner of Salmon Street we spotted a building with 1930s deco stylings, now a self storage place. Self storage is one of the stranger growth industries of our times. We now have so much stuff in the developed world that we have outsourced looking after it to warehouses in places like Port Melbourne industrial estate. We work long  hours and earn money to buy stuff to put in boxes and then pay someone to take care of it for us. I have often thought that there is a good novel to be written or documentary to be made about the goings-on of a self-storage facility. 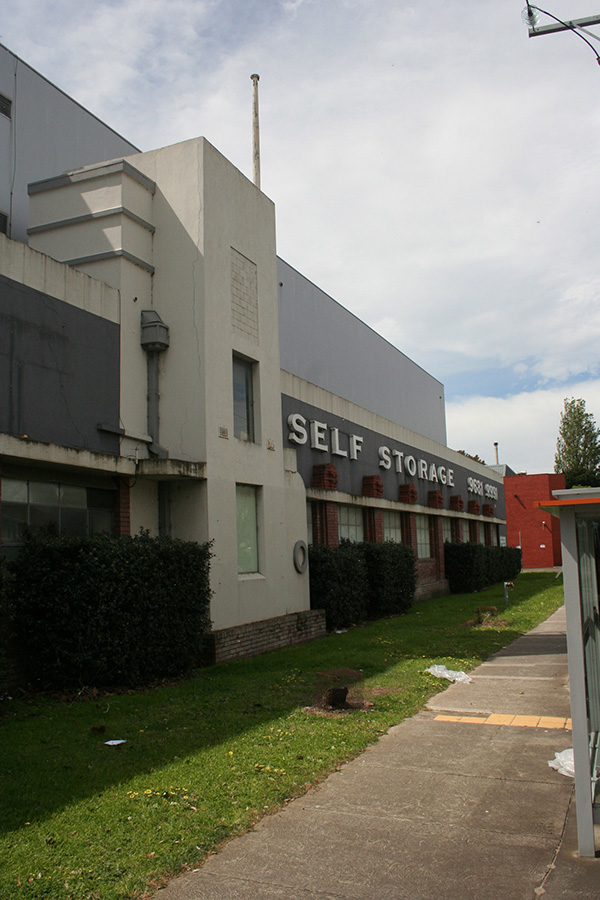 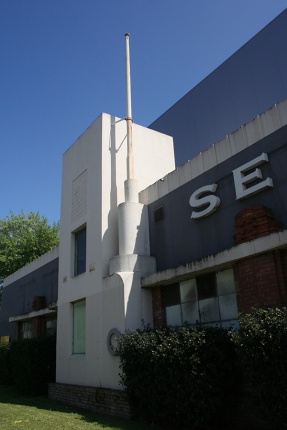 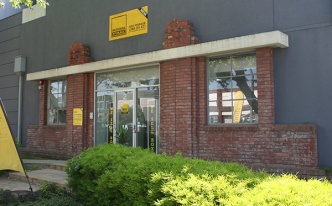 Now we were deep inside the dark heart of the industrial estate. It was Saturday, and the place was deserted like a post-apocalyptic landscape: empty car parks, vacant streets, no sign of life except for a few people heading in to the go-karting place ($1 a lap, minimum 40 laps). Many of the buildings were low, flat warehouses with no distinguishing features, with some more interesting interwar architecture interspersed. Quite a few of the businesses are recreational rather than industrial: go-karts, paintball, and something called an ‘escape room experience’ which offers you the thrill of being trapped in a room with 45 minutes to escape. 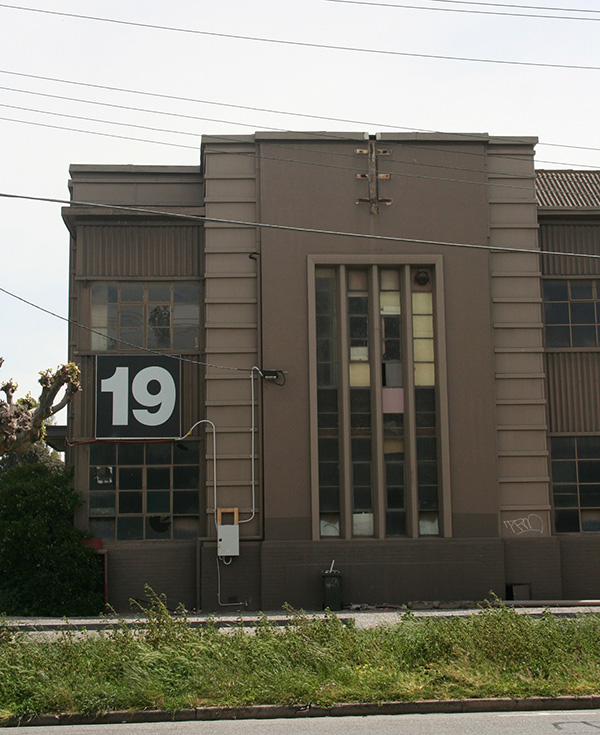 Some unexpected ornamentation on these windows.

Some ghostsigns are visible on the wall of a former servo, also on the Salmon Street/Williamstown Road corner. 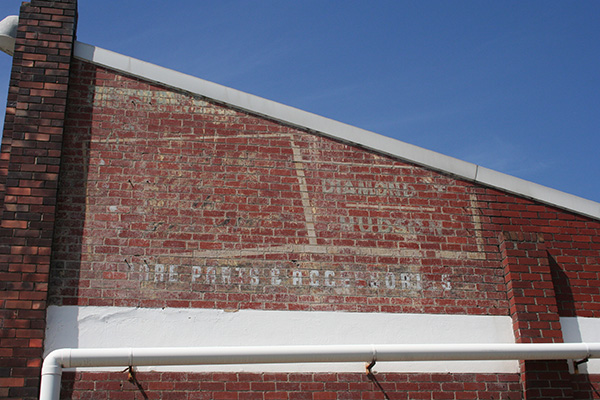 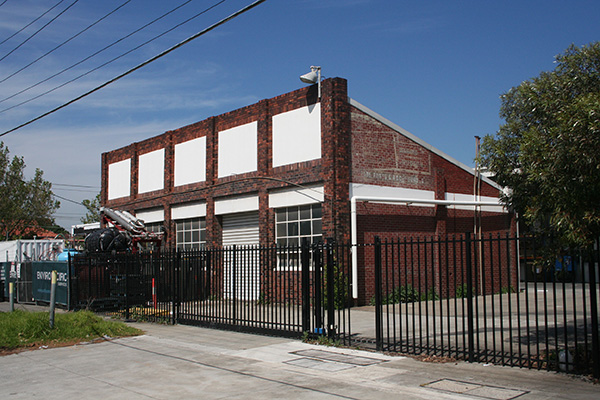 Otherwise it’s a landscape of self-storage, couriers, logistics and financial services, and businesses whose activities are impossible to identify. It’s designed to be as boring as possible, so your eye glides over it.

But as we turned a corner into Prohasky Street, thousands of containers came into sight, arranged like a painting by Mondrian.

It was a hot, windy day, and blizzards of pollen were blowing down the empty streets like snow. At the end of the street we turned left and started walking along beside the Westgate Freeway. On our left was a container yard, along with an open drain full of garbage. There was no footpath so we walked along a rocky grass verge between the road and the drain. It was safe to say that pedestrianism was not encouraged but there was no other way.

“The edgelands don’t like us,” Lynne responded.”And there are probably snakes.”

“But you are getting a different view of the city,” I mansplained. “Isn’t it exciting to be seeing Melbourne in a way that most people don’t? You would normally have to break down to have this experience.” 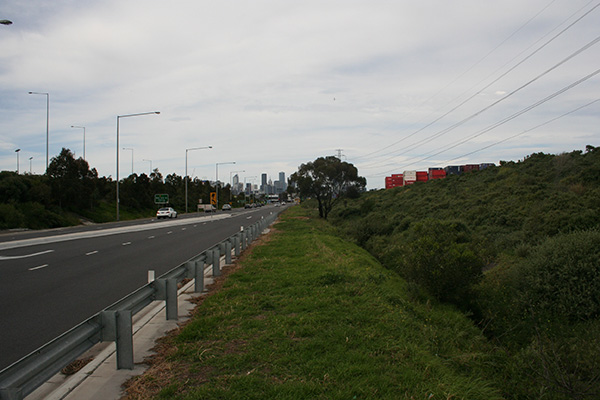 Lynne told me how she once got a puncture when riding her bike in the outskirts of a French town, and had unwisely accepted a lift back to town from a creepy guy sitting creepily in his car who could have been a psychopath but turned out to be only a pimp sitting there supervising his girls. The moral of the story was that she doesn’t like edgelands because they are outside the regulated, observed and public world: all kinds of things go on there and no one notices because they are, well, edgelands. They are places that you drive through, or past, on the way to somewhere else. Maybe everyone has unsettling memories of edgelands, which is why we avoid them.

By now we had reached Todd Road, the point at which traffic either comes off or enters the Westgate Freeway before crossing the West Gate Bridge. I wrote about the other side of the bridge a couple of years ago, when I had just started this walk, so meeting it from the other side felt like reconnecting with an old friend. There is a footpath and bike path under the bridge, leading to Westgate Park, so Lynne was reassured that we were now back in the civilised and regulated world. We crossed obediently at the lights and headed into the park.

I had driven over this park many thousands of times, but never set foot in it before. This is one of Melbourne’s newest parks and, information boards told us, unusual in that it had been created in the early years of the 21st century by a friends’ group who reclaimed the area and revegetated it with native species. It contains two lakes – one salt water, one fresh water. At certain times of the year the salt lake turns pink, due apparently to algae. However, it is presently a more orthodox colour. 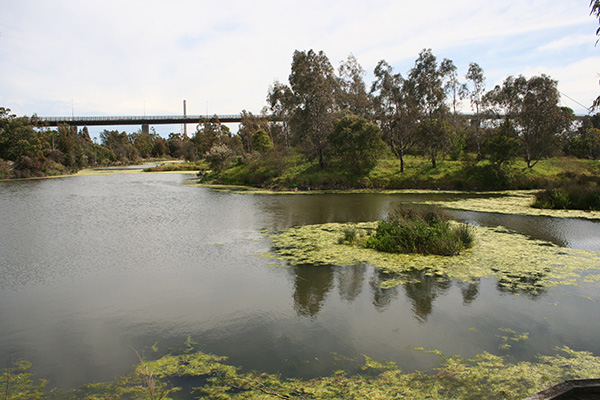 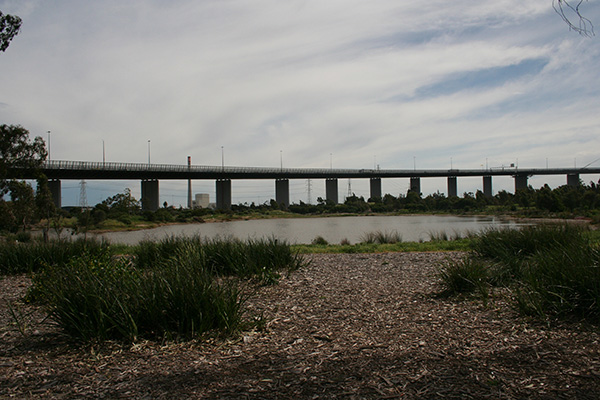 The park attracts many native birds, none of which I know the names of. Obviously, I can’t recognise any native plants either.  Robert MacFarlane, the English nature writer who writes so beautifully about how nature is reclaiming urban and industrial spaces, would be able to say something like “I heard the plaintive cry of the lemon-footed shrike” but all I could say was things like “Oh, look at that white one.” Suddenly, from the unidentified native bushland at our feet, something whirred into life and zoomed up into the air: I looked up in the hope of seeing a rare native bird, but it turned out to be a guy playing with a drone.

So we walked around the lakes, through bushland which is undeniably pleasant, while the traffic whomped over the bridge above us. Millions of winged insects – dragonflies, Lynne said – zoomed around us in a way that was frankly annoying. There are sculptures in the park, big wooden totemic things, a bit reminiscent of the wooden posts we had seen earlier in the ocean. 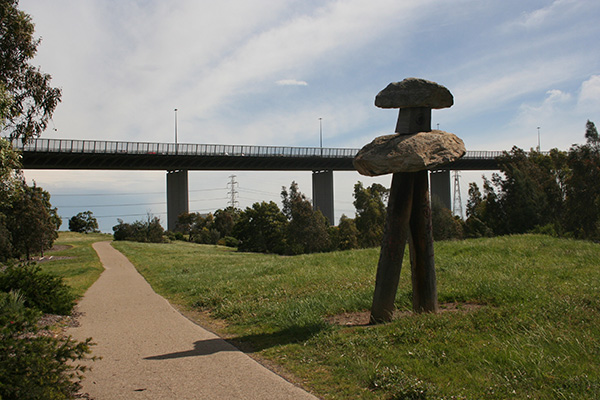 Sculpture by Lyn Moore in Westgate Park. West Gate Bridge in the background.

“Look!” Lynne said, “a blue wren.” And there was a small bird with blue flashes on its wings. It was great to see something that we wouldn’t normally see, all the more so for it being in such a location, under a freeway not far from the docks. And although I don’t know any of the names of the native flora and fauna, it feels good to know that it is there. 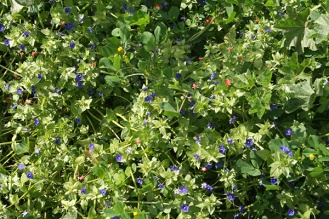 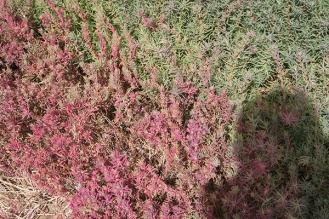 More on the park: ‘Journey to the pink lake’ by Carringtonia on her blog Rising to Gale.

Find out more about Westgate Park at westgatepark.org.