After two and a half years of circumnavigating the city, and more than 60 walks through more than 40 suburbs, we have reached the final walk, and today we are completing the circle.  Beginning at Westgate Park, just below the West Gate Bridge, we are going for one final stroll around Port Melbourne and Fishermans Bend before jumping on the Punt back to the western side of the bay and returning to the point where the circle began in 2014.

This part of the city, on the south bank of the Yarra, bisected since the 1970 by the freeway leading to the West Gate Bridge, is very much in transition. Besides the docks, there used to be car and aircraft makers here, and all kinds of other manufacturers; but most of them have left, or are leaving soon, and the land has been rezoned for housing, or is awaiting transformation into what the state government says will be a techno-science-manufacturing hub, or something like that. In a few years, when someone walks along here, the streetscape will have changed totally. In many parts of Melbourne there is a strong sense of the past but here, walking along the long wide streets between low industrial buildings and empty blocks, I have a sense of the future waiting to happen.

Walking south down Todd Road on a shared bike/walking trail (which ultimately leads to a nice lookout over the bay, but we didn’t get that far), we came to  this big red barrier. I’m not sure what the point of it is. It can’t be meant to keep people out, Donald Trump style, because there’s a path that leads straight through. If anything, it fills you with a sense of intrigue about what is on the other side.

But once you walk through, it’s not exactly pedestrian friendly. There’s a long straight road, Webb Dock Drive, that takes you towards the river, with freight yards on one side and car compounds on the other. It’s a functional space, not recreational. It was Sunday so not much was going on, and few people were around to observe the odd sight of us taking our afternoon stroll beside the docks.

It had that other-worldly feeling that normally busy places sometimes have on a Sunday, and in places the grey concrete, orange posts and painted arrows give it the feel of a painting by Jeffrey Smart, the great artist of industrial landscapes. 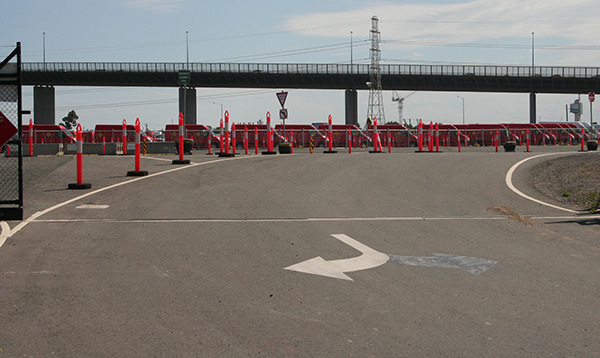 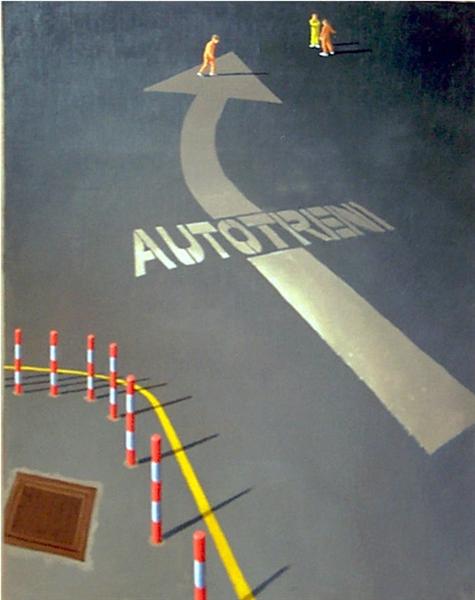 ‘Study for car park at night’ by Jeffrey Smart

Fishermans Bend has a history of car manufacturing. But all that is changing. GM Holden has been in the suburb since 1936, but is ceasing manufacturing in 2017, and has sold off its land to the Victorian Government. As far as we could see, the thousands of cars lined up in the compounds were imported vehicles – Nissans and Renaults.

We turned back and headed back north up Todd Road again, making our way on foot across the busy intersection under the West Gate Bridge, where there have been plantings of native species, adding a welcome splash of green to the streetscape.

Then we heard the buzz and whine of giant insects. On our right was the Go Kart Club of Victoria, where an event was in progress. We wandered in and watched for a while. A highly competitive juniors race was going on while all around the track people were tinkering with their go karts. It did look like a lot of fun. 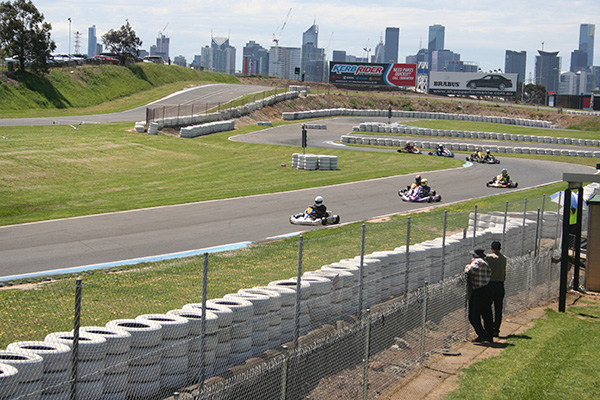 Racing at the Go Kart Club of Victoria

Overall, though, there’s a forlornness about this part of town which comes from knowing that many of the industries here are either on the verge of closing or have an uncertain future. There’s a big Herald and Weekly Times plant, for example – but who knows how long newspapers will survive?  There are rusty, overgrown railway tracks, dating from I don’t know when.

But there’s also a sense of the next generation of business and industry getting ready to move in. Vacant blocks are adorned with placards trumpeting the forthcoming opportunities. In the middle of one of these lots we spotted a tangled pile of fence poles and wire mesh, twisted together into a rough sculpture, like a relic of a cult. 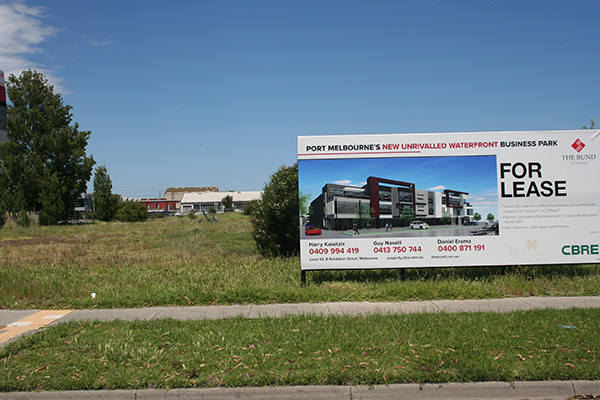 Wandering along the south bank of the Yarra River we found ourselves underneath the Bolte Bridge, looking north. I’ve driven over it many times but never seen it from the underside. Jeffrey Smart came to mind again – in fact there are many locations around here that would have suited him. 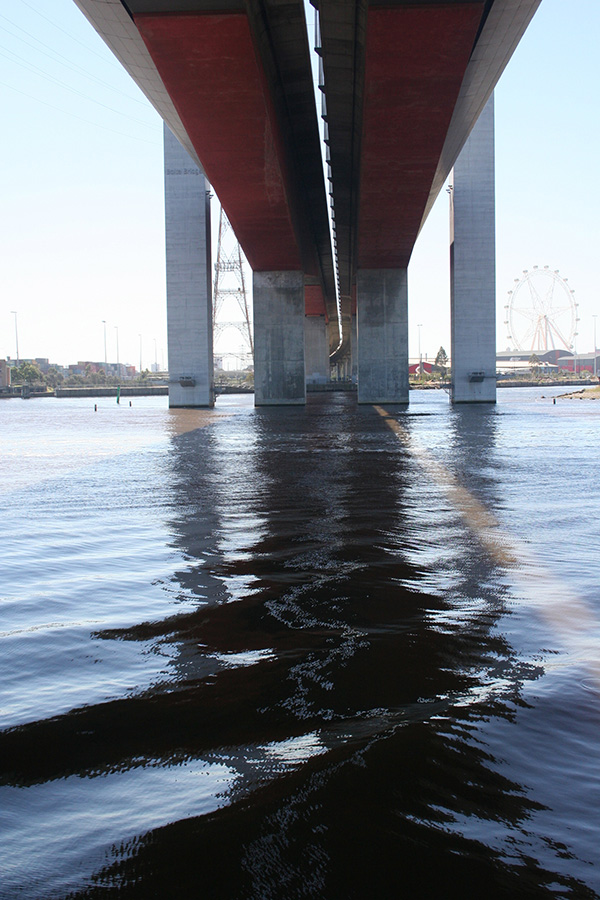 Where the Bolte Bridge crosses the Yarra

Underside of the Bolte Bridge. 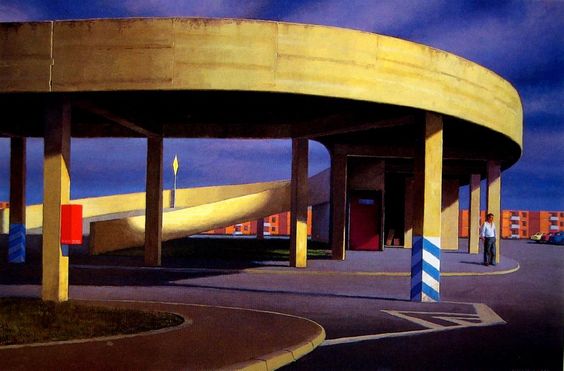 One of Jeffrey Smart’s many paintings of bridges.

Beside the Bolte on South Wharf are some sheds that have been preserved, and perhaps these too will experience some kind of future repurposing. 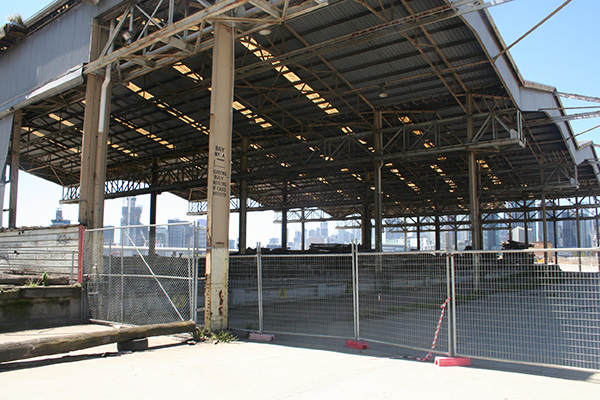 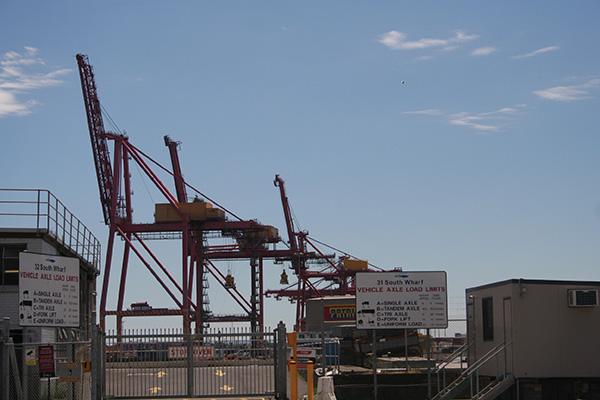 This suburb has an important place in aviation history, and Boeing still has a building on Lorimer Street, on the side of which a plane like a blue whale is taking off.

But our mode of transport was more humble. The Punt runs frequently every day between Port Melbourne and Spotswood. It’s a short trip across the river, under the West Gate Bridge, delivering you to a jetty just opposite the old pumping station (now Scienceworks). The punt is popular with cyclists and walkers who find it a convenient way to connect up with bike and walking tracks on either side.

The Punt runs daily between Spotswood and Port Melbourne

Skipper at the wheel.

I’ve crossed the river over the West Gate Bridge many times, but this is the first time I’ve done so under it. After our big clockwise loop around the north and east of the city, we made landfall in the western suburbs again. There in our wake were the suburbs we have spent the last few months walking through. 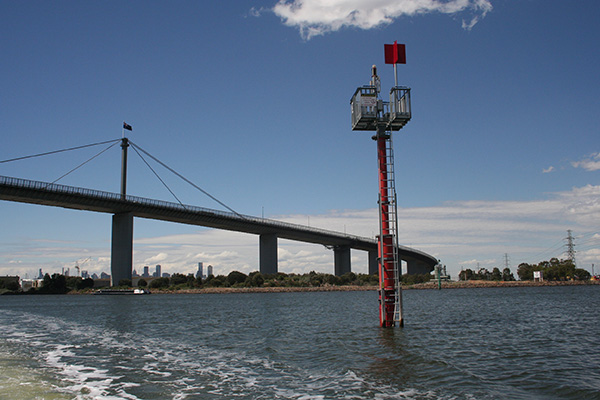 And ahead of us the superb architecture of the Spotswood pumping station, built in the 1890s as part of the Melbourne Sewerage Scheme – one of those great civic improvement schemes that the Victorians seemed to manage a lot better than we do.

From there it was just a short walk back to Williamstown, where we began from Gem Pier more than two years ago.  The circle was complete.

As I stood on Gem Pier, savouring the feeling of completion, a restored sailing ship came in, looking anachronistic among the yachts and powerboats, symbolic perhaps of the way that in Melbourne you can’t miss the presence of different time zones alongside each other.

And nothing stays the same for long. I headed up the road a little way to see what had become of the historic Victorian pub that used to stand on the corner of Nelson Place and Ann Street until a couple of years ago. Back then, when I passed it on my first walk in July 2014, there was a fight going on to save it; today it’s a construction site. It’s the story of Melbourne in miniature, played out in thousands of locations all over the suburbs. 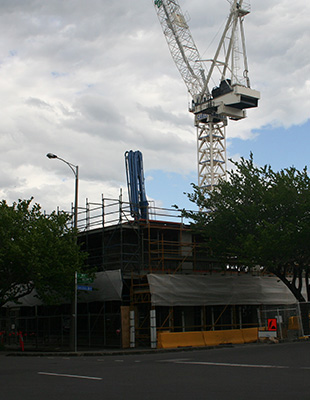 A bit later on, when I’ve had time to think about it, I’ll reflect on what I’ve learned from this whole journey around the Melbourne suburbs. But for now I’m just glad to have completed the circle – and glad that I live in a city whose suburbs are a source of such variety, intrigue and beauty.

All the walks on Melbourne Circle: stories by suburb