Elizabeth Street marks the point on Victoria Street where you cross from North Melbourne into Carlton. As with the western section of Victoria Street, there’s a great diversity of things to see along here. I finished the last post with a reference to uncontrolled apartment construction. In contrast, on the other side of Elizabeth Street is the elegant former HQ of the Rechabites, a Victorian temperance society devoted to preventing the evils of strong drink. They must have been a reasonably powerful and wealthy organisation to afford a building like this, in this location. (Here’s my piece about the temperance movement in Melbourne.) 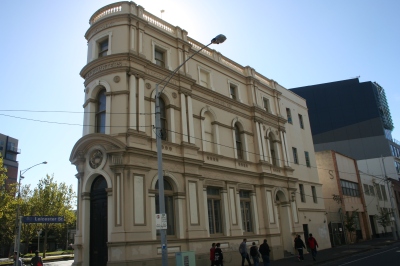 A little further along on Victoria Street, backing onto Therry street, is The Royal Melbourne Regiment 6th Battalion Drill Hall – one of the best public buildings built by the Commonwealth in Melbourne. Originally this sizeable triangular building it was not only a Drill Hall but also contained areas for regimental stores, an armoury, lecture halls and so on. These days it’s occupied by a mixture of retail (groceries, waxing salons) and services (a health centre, a multicultural hub). Unfortunately its stylish moderne design is now overshadowed by monstrous skyscrapers, and some hideous green box apartments have been plonked on top of the Drill Hall itself. At ground level it still looks good, though, with those horizontal bands of cream bricks running along the side, the rounded corners, and that impressive classical portico. 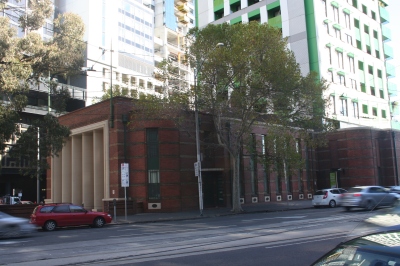 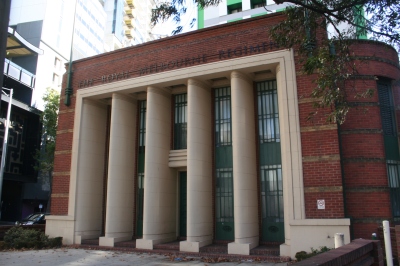 Portico of the Drill Hall

While on the subject of skyscrapers – it’s hard to avoid them in this part of town – you can’t miss the huge construction site at the old Melbourne Brewery on the Bouverie Street corner. According to the Victorian Heritage database, the first brewing on this site was in 1858. In 1864 the Carlton Brewery opened here, to be taken over in 1881 by the Melbourne Brewing and Malting Company. The company brewed ale for the rapidly growing population during the boom years of the 1880s, no doubt quenching the thirst of many thousands of construction workers around the city (whatever the Rechabites had to say about it) and becoming one of the biggest brewers in Melbourne.

The CUB website says that the company had its own tug-of-war team and even its own fire brigade. After various name changes, takeovers and amalgamations, the brewery became part of Carlton United Breweries in 1906, and was still functioning until 1988. 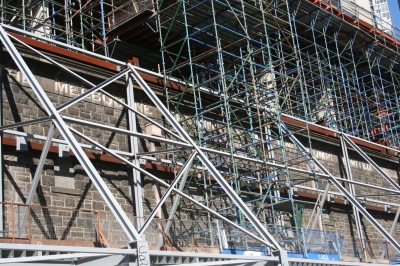 Much of the site was demolished in the 1990s and the facades of the Victorian bluestone buildings on Bouverie Street – constructed in stages between 1864 and 1927 – are all that remain. The name Melbourne Brewing and Malting Company is just about visible behind the scaffolding – while another huge structure rears up behind it. The real estate banner trumpets that there is a permit for 1,037 new apartments on the site. To see some photos of what it looked like in Victorian days, check out the history of CUB. 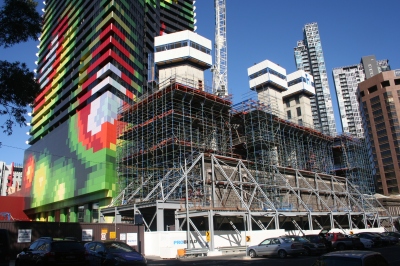 Construction site at the old Carlton and United brewery

Soon the familiar landmark of the Melbourne City Baths (1903-04) comes into view on Swanston Street. This Edwardian Baroque building with its ‘blood and bandage’ colouring is certainly a lot of fun, though to modern eyes it looks overcooked. Then again, what will we be saying in a few decades about the apartments that are being built now? At least the City Baths is a solid, striking building that commands attention, and has lasted. 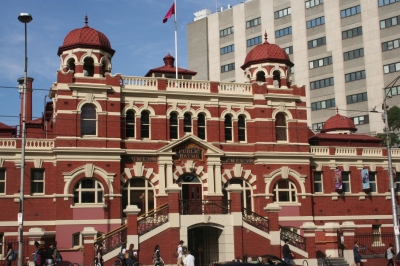 For the opposite architectural extreme, a little further up the road is the brilliant Plumbers’ and Gasfitters’ Union building (1970), a fine example of Melbourne brutalism, a bold and blocky concrete structure. All ornament has been stripped away leaving a structure that’s tough and uncompromising. It seems to make a statement about the power of solidarity – in the more unionised 1970s, anyway. 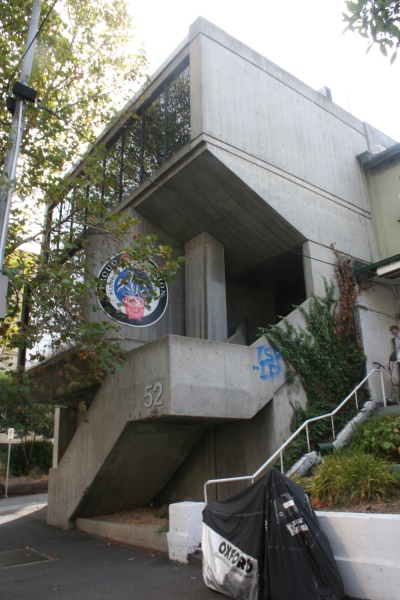 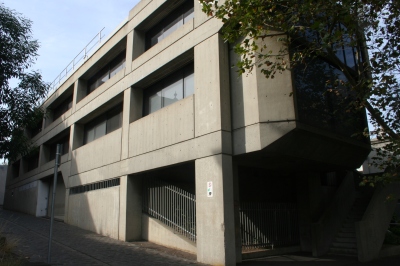 Talking of solidarity, not far away, at the corner of Victoria and Russell Streets, is the famous monument to one of the union movement’s greatest achievements: the eight-hour day. This marks the victory won by the stonemasons in 1856, who downed tools and marched to Parliament demanding shorter working hours. Their victory resulted in acceptance of the principle that the day should be divided into eight hours’ work, eight hours’ recreation and eight hours’ rest. The stonemasons’ victory used to be marked by large processions on the anniversary of the strike, and the monument was erected in 1903. (The full story of the stonemasons’ strike is told by Jeff and Jill Sparrow in Radical Melbourne). 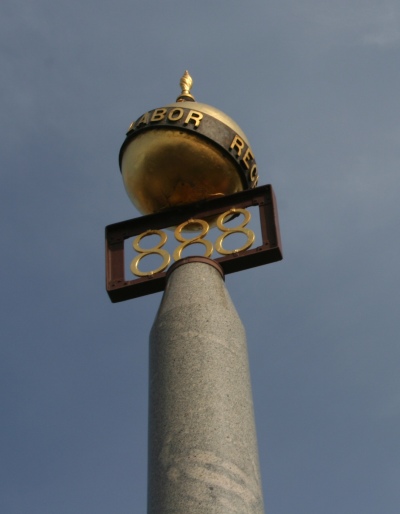 Once the workers of Melbourne had won the right to eight hours’ free time, they were able to participate in many kinds of recreation – such as, for example, horticulture.  Just up the road at 31-33 Victoria Street is Horticultural Hall (see what I did there?) built in 1872-3 for the Victorian Horticultural Society.

These days the Royal Horticultural Society of Victoria is celebrating its 165th anniversary, and has a vast range of associated clubs covering everything from carnivorous plants to bonsai fanciers and the Cactus and Succulent Society. But it all started here, at what is now known as Horti Hall, occupied today by Victorian Opera. On the day I walked past, a rehearsal was going on, and magnificent voices were ringing out from within, the echoes of some grand doomed passion drifting over the car wash at the rear of the building.

I wandered around the back where I found some lovely ghostsigns. They are hard to read, but I was able to make out the words ‘Victorian Orchid Club meets here 3rd Monday each month’ and ‘Cordial welcome’. I was hoping someone would come out saying: ‘Hey, what do you think you’re up to?’ so I could say ‘Where’s my cordial welcome?’ 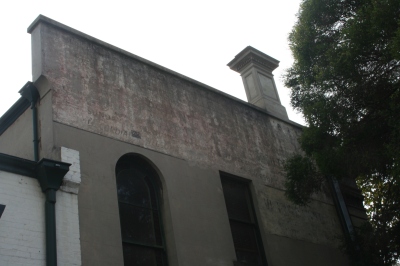 Beside the front door of Horti Hall is another intriguing sign, in Victorian script, for the ‘Universal High School, Registered as Secondary, Primary and Sub-Primary School, School Principal … Hamley M.A.’ So at some stage – is that the year ‘1895’ at the bottom? – the Horticulturalists apparently shared the premises with a school. I haven’t researched this, but would like to know more. 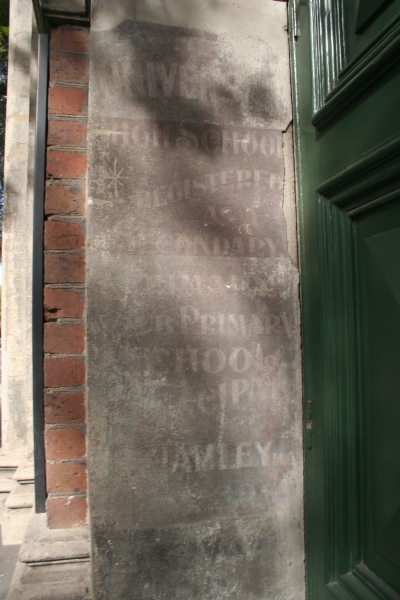 A large scale work of street art in the Mackenzie Street car park can be seen from the back of Horti Hall. I’m not sure I want to know what is meant by ‘Pork the town pink’, but perhaps that’s what Don Giovanni used to do. 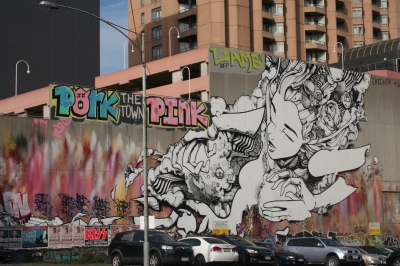 The final stop on this walk along Victoria Street is the headquarters of the Royal Society of Victoria, a classical Victorian building designed in 1859 by Joseph Reed, who was also the architect, 20 years later, of the much more lavish Exhibition Building, just across the road in Carlton Gardens (here’s my piece about the Exhibition Building in The Guardian). The Royal Society, like the Horticultural Society, set up here in the mid-nineteenth century – maybe some people belonged to both – and the Royal Society is still there today.

A plaque notes that the original society supported the Burke and Wills expedition –  I’m not sure I’d be boasting about that, given that it was such a debacle, with most of the party expiring in the desert due to lack of planning, lack of knowledge, and Burke’s refusal to accept the help of Indigenous people. It’s a bit like saying you were right behind the launch of The Titanic. However I have no doubt that the RSV has supported many far more successful and worthy projects. 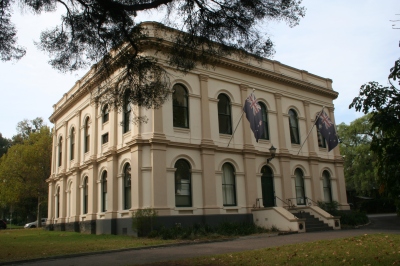 Headquarters of the Royal Society of Victoria

The eastern end of Victoria Street is now in sight,  as when you cross Nicholson Street it becomes Victoria Parade. At this point I’m going to leave it, retrace my steps a short way and head north, away from the CBD and into North Melbourne.  But I do recommend taking a walk the length of Victoria Street when you get the chance – there’s plenty more to see in addition to the few things I have described.

Next walk – Layers of ghosts on Abbotsford Street

Previous walk – A walk along Victoria Street, Part One