Maidstone is the suburb between Braybrook and Footscray, just south of the Maribyrnong river. We walked through Maidstone and Braybrook on an unexpectedly hot spring day.

You don’t see many casual strollers around here. It’s a place of truck depots, wreckers’ yards, car yards, warehouses and vacant land, some of which is earmarked for the inevitable apartments. And cars, cars everywhere, either second-third-fourth hand, or in the form of scrap.

On Lacy Street we came across a yard where carnival rides and equipment were piled up alongside stacks of tyres and rubbish. Those garish attractions looked forlorn in that setting.

The carnival is over. 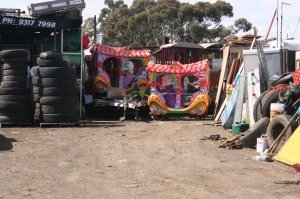 As I was taking photos of this surreal scene, a knackers yard for plastic horses, a couple of blokes came out and asked what I was doing.

“Taking photos for a history project.”

When we mentioned the ETA factory just up the road, the Maidstone visitors welcoming committee relaxed a bit, and even shared some history of their own – the ETA factory used to be a VicRoads licensing centre. (A fact later confirmed by followers of this blog on Twitter).

Our acquaintance was exaggerating Maidstone’s reputation. Most of the suburb consists of peaceful law-abiding suburban streets. Roses. Geraniums. Water features. And a private golf course, on which no one seems to play. (In fact, according to Victoria Police statistics, in 2013-14 there were only four homicides in the whole of Maribyrnong, which compares well to other parts of town).

Besides which, most history consists of violence. You could say the same of the Tower of London, or St Mark’s Square in Venice. “People getting murdered, people getting stabbed? That’s the only fuckin’ history around here.”

Different businesses cluster in different parts of the city. You go to Lygon Street for pizza. To William Street for lawyers. To Ballarat Road, Maidstone for used cars.

Maybe its location on Ballarat Road has made it a natural place for transport businesses. Looking back to my 1946 street directory, there were cartage contractors, trailer builders and an oil refinery here back then. Maybe back in the 1850s, prospectors used to stop here to get their horses and carts fixed on the way to the Ballarat goldfields.

These days a dozen or so used car places congregate near Ashley Street, and nestled among them – like ticks on a dog – are the inevitable easy finance loan places. Nearby there’s a hotel where you can gamble on the pokies and play mah jong. This combination of used cars, easy finance and gambling lends the place an air of quiet desperation. ‘Bad credit welcome’ reads the sign on more than one place.

There’s hardly anyone in the car yards the day we walk through. Ragged bunting flaps disconsolately in a hot breeze. Some of the lots are half empty, or for lease. The only sign of activity is in a car wash place where a few blokes are cleaning cars.

Nearby, opposite the Samoan Assembly of God, stands Fun Galore, where you can race a go-kart against a manically-grinning green-faced alien if that is your thing.

We headed away from the car dealers, down Omar Street and past the Medway Golf Club. We passed a house whose owner has added a surreal touch to their front garden by filling it with cement angels, donkeys, kookaburras and bunny rabbits, all grouped together democratically. Like those displays of lights on houses at Christmas, it’s a kind of self-curated, defiantly personal folk art found only in the suburbs.

Further along, close to the Maribyrnong river, we entered a newly built housing estate. There’s not a soul around and the places are silent and deserted in the heat. The nature strips are plastic grass or gravel. The gardens are white pebbles. Again, there are a few touches of individuality. A large unidentified deity drowses in the shadows of a shrine. Further along, dwarves cavort on plastic grass under cement toadstools. 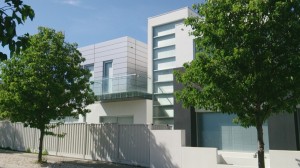 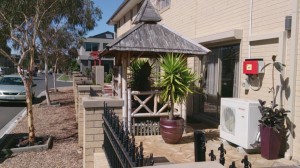 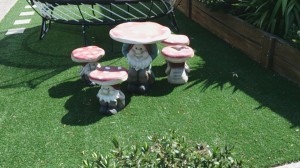 Nearby, brooding over the estate, stands a mobile phone tower which gives the impression of a totem presiding over the suburb. It looks like it needs to be worshipped, or have sacrifices performed on important occasions. Against a dramatic cloud formation (as in the pic at the top of this post), it’s really quite something.

You can imagine some kind of sci-fi scenario in which, one day, the tower begins emitting a powerful signal that draws the people out of their houses, one by one, standing together on their white pebble gardens and staring up, open mouthed, as the sky boils and the alien spacecraft silently assemble.