This wall is on the corner of Lygon Street and St Philip Street, East Brunswick. I paused there, drawn by the presence of some very faded ghostsigns. It’s pretty hard to make them out. But when you’re an experienced wall-starer, small clues are enough to reveal what is lurking there. On the left, the word ‘Soap’ is clearly visible, below a circle, above which is the word ‘Lifebuoy’. Easy enough. The sign in the middle isn’t so easy to decipher, but you can just make out the words ‘Monkey brand’ at the top of the wall – another brand of soap, which I’ve seen in a few ghostsigns around the suburbs, often advertised with the figure of a monkey, although he doesn’t seem to be in evidence here, unless he just slipped away.  The hardest of all to read is on the right, which is an advertisement for Lux soap, almost completely washed out.

My 1946 Sands & McDougall tells me that in 1946 this shop was a grocer run by H.C. Marshall; presumably it was a shop for many years before that, as these ghostsigns probably date from the early 20th century, perhaps even earlier – Monkey Brand was certainly being advertised in Australia in the 1890s.

Grocers’ shops are pretty rare these days. ‘Grocer’ is one of those occupations that has pretty much disappeared, now that we all go to supermarkets. Nobody groces any more. Grocing has gone from our society. And yet there used to be thousands of these small shops all over our suburbs.

There are frequent remnants of grocers’ shops around this part of town. Some of them were here for the best part of a century, passing through various changes of ownership. They often reveal themselves by the presence of ghostsigns for the traditional products that everyone needs – bread, soap, tea, milk – as well as the optional extras: coffee, cigarettes, newspapers, sweets, lemonade …

I continued down Lygon Street, crossed Brunswick Street and turned left into Park Street. Around here, I kept getting confused about which suburb I was in. The borders are not clearly marked. But then a young fellow went along the cycle path on a unicycle, and I realised it must be Carlton North. (He was gone too quickly for me to get a photo.)

Visible from Park street, at the intersection with Canning Street, there’s a former grocer’s shop which is quite famous in ghostsign circles for the quantity of signs there. 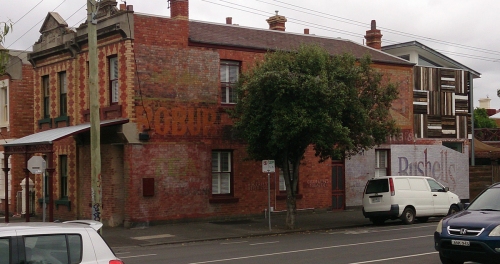 The clearest are Robur Tea, Bushells tea, and there are the remains of a Velvet Soap sign.  You could also get your butter and eggs here.

The sign with the cross shape at the top was once an advertisement for Velvet Soap. 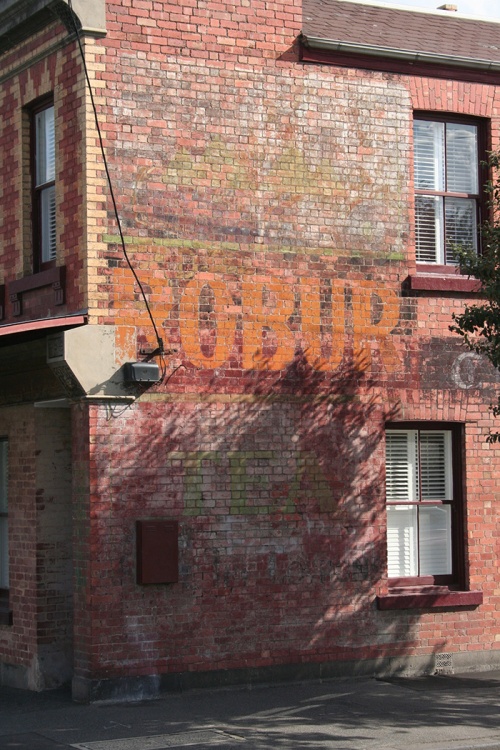 Above the quite clear Robur sign is the remains of an ad for something, with the words ‘The candy mint’

The name of C. Robson appears on the wall.  Mrs C Robson, confectioner, was here for a fairly short time in 1939. 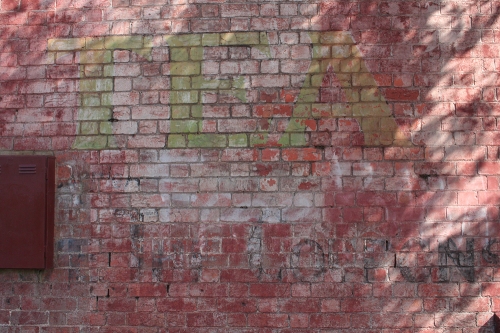 The words ‘Save the coupons’ are faintly visible in black at the bottom of the picture. 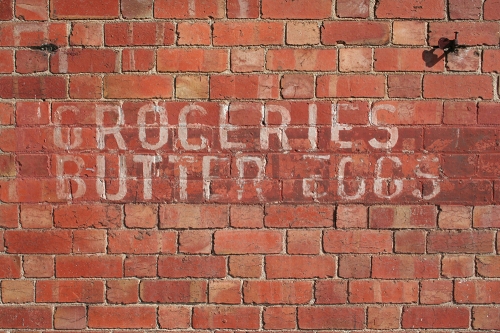 Next door to Robson’s grocer’s shop there used to be a timber yard where you could get your briquettes. 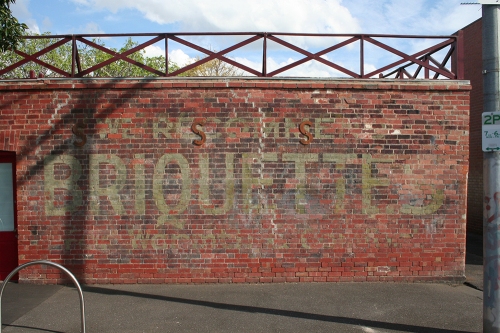 We recommend briquettes. Warmth and comfort.

Besides the various product advertisements, the only name on the wall of the grocer’s shop is C. ROBSON. Wanting to know when C. Robson had been operating here, I did a quick check through the Sands & McDougall street directories. This building – the address is actually 683 Canning Street – was a grocer for much of the 20th century. Originally, a Henry Burgess owned both the grocer and the wood yard next door. Burgess was both a greengrocer and a confectioner. Between the First and Second World Wars a succession of other grocers were here. Mrs C. Robson was the 1939 occupant, although by 1941 she had gone. Despite her comparatively short occupancy, the name of Robson is the one that survives.

I wonder if the other signs on this wall date from roughly the same period, around 1939? I was interested to see the words ‘Save The Coupons’ under the word ‘TEA’. Perhaps this is a reference to the rationing coupons that were issued during the Second World War.*

During the war there was a serious shortage, because the Japanese had captured the countries that grew the tea supplied to Australia. Obviously a lack of tea could be devastating for public morale, so tea coupons were issued to the public to ensure that everyone got a fair supply.

Here’s an article about tea coupons from 1943. Fiddling your coupons was a serious matter. 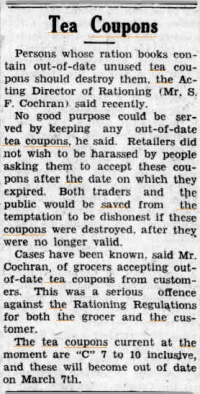 [* It is probably more likely, as commenter Edwin Day points out, that the coupons one was encouraged to save were part of a marketing campaign rather than rationing coupons.]

Tea was obviously a popular product since there are ads for various brands all over this wall. I noticed an attempt at restoration where someone has freshened up the cup of tea below the Bushells sign. It’s a matter of opinion of course but in my view this kind of addition isn’t an improvement. 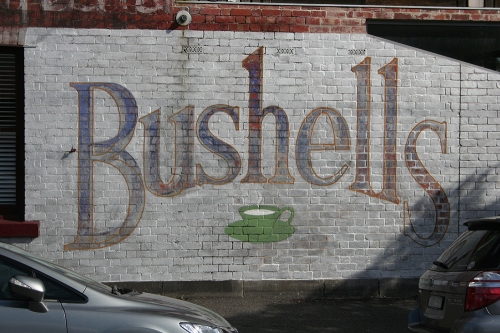 Green tea? Ghostsign after restoration, with the recent addition of lines around the lettering and a fresh cup of tea.

You can see the kind of effect they were aiming at if you wander down Rathdowne Street, where another Bushells sign survives in original condition, on the wall of another old grocer’s shop.

Actually there are Bushells signs all over this neighbourhood. A little further down Rathdowne Street I found this. I particularly like the way that the word ‘instant’ is in italics – suggesting speed, I suppose. Because who would want to wait for coffee, in the modern fast-paced world! The name at the top of the building is N.Pose – yet another grocer, who was here in 1946 (though the signs are probably more recent than that, the instant coffee anyway).

A block away, on the corner of Pigdon and Canning Streets, is another old milk bar with yet more Bushells signs. 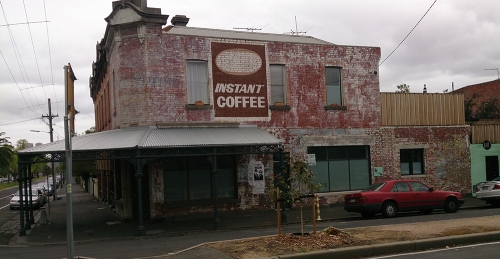 You may have to take my word for it, but I can see the words ‘More cups, finer flavor’ on this very faded ghostsign.

The word ‘Bushells’ has disappeared, but the rest of the sign makes it clear what brand it was.

Obviously, where there is coffee and tea, you also need this.

Bushells has a long history in Australia – from 1883 onwards, when an English tea merchant, Alfred Bushell, moved to Brisbane and started a business there, though the company was later based in Sydney. The business thrived for much of the 20th century, due in part to clever marketing ploys like this:

‘In 1937 Bushells Ltd formed a company in New Zealand. To introduce their product to New Zealand the company sent every housewife on the electoral roll a personally addressed letter together with a card entitling her to a half pound (225g) of tea, completely free of charge. This quickly established the company and within a year it had a huge section of the tea market.’

(I wonder how they knew who the ‘housewives’ were? Did single women count? Did you qualify for free tea if you were a working mother?)

The Bushell family sold their shares in 1978, at which point it ceased to be an Australian company. At some stage the brand name was acquired by Unilever, but in the complex world of global capitalism, who knows who owns it now? Probably a New York private equity firm that thinks Melbourne is in Austria.

Even so, the Bushells logo today is pretty much the same as it has been for decades – the name in curving type above a cup of tea. It has instant recognition built up over decades of appearing, among other places, on the walls of grocer’s shops. I include it here as an example of the value of consistent branding, not as a shameless piece of product placement (Melbourne Circle has no need to declare any conflict of interest or tea sponsorships).

If so inclined, you can read here about the history of Bushells tea.

Tea rationing in Australia – The State Library of Victoria

View a map of the walk on Google Maps