If you turn right out of North Melbourne station and walk along Adderley Street towards West Melbourne,  pretty soon you will reach a house on which the remains of a mural can be clearly discerned. The first thing you notice is the sun, beaming down benevolently on commuters trudging towards their workplaces. You can also make out a rather angry looking cloud, a flash of lightning, a small farm building nestling among pink hills, and the word ‘radioactive’.

Along the bottom of the wall are words which with a little concentration can still be read: ‘Let’s use the sun, wind and water for our energy needs, not – ‘

The final word is missing, which occupied me for several months as I pondered what it could be. Oil? Coal? Bananas? Whatever the answer, the mural was evidently a survivor of the political mural movement of the 1970s and 80s, when walls around the world were painted with murals denoting support for progressive causes. They were often painted by members of the community rather than professional artists, and with the passing of time many have been painted over. This is a rare survivor.

These days Melbourne is endlessly promoted for its lively street art scene, but it’s worth recalling that activists first took to the city’s walls several decades ago.

Detail: Let’s use the sun …

A few days ago I was taking a walk with Sydney psychogeographer Vanessa Berry, author of the wonderful blog  Mirror Sydney, who was visiting Melbourne. Vanessa has written a great post about Sydney’s community murals, so I wanted to show her this one. As we stood looking at the wall, the combination of the two of us must have created a form of intense psychogeographic energy, which drew the current owner of the house, Beth, out to talk to us.

Beth told us that the man behind the painting of the mural was former owner John Weickhardt, and that she could put us in touch with him. Soon after that I was talking to John, who was able to tell me the story of the mural.

John recalls that at the time he was running his film distribution business, Cine Action, from the Adderley Street house which he owned. The faded Cine Action logo can still be seen on the wall.

John was also a member of the Movement Against Uranium Mining (MAUM). He and a group of fellow activists decided to paint a mural on the western wall of the house, to express their opposition to the Fraser government’s plan to mine and export uranium from Arnhem Land. Riffing off a well-known statement of Malcolm Fraser’s ‘Life wasn’t meant to be easy’, they settled on the slogan ‘Life wasn’t meant to be radioactive’.

Another member of the group, architect Jack Lewis, scaled up the original drawings to fit the wall. John says that 15-20 people worked on the mural, which was completed in the course of  one day in November 1977.

John recorded the day’s activities on a 16mm camera. The result is a 20-minute film which shows the gradual transformation of a blank wall into a powerful environmental statement. (The video, ‘Life wasn’t meant to be radioactive’, from which the following stills are taken, can be borrowed from North Melbourne Library on DVD).

The wall was prepared by painting over the Cine Action logo and sketching out the elements in outline. Gradually, during the day, as their children played around them, members of the group filled in the parts of the mural – sun, wind, lightning, farm and landscape – in bright, vibrant colours.

When it came time to paint the upper parts of the wall, the group improvised. In a move that these days would bring out occupational health and safety officers in a cold sweat, but was not a problem in the more carefree 1970s, the painters balanced their ladders on top of their kombi van and climbed to the top. Voila! “It’s good that no one got killed,” John reflects today.

John and the team in action.

The mural as it looked when freshly painted in 1977.

In the 38 years since it was painted, the house has changed hands a few times, but the mural has been retained, though the bright red hills have weathered to ice-cream pink, much of the text has disappeared, and the critical final word – uranium – was painted over at some point, leaving the final statement enigmatic. Also, curiously, the Cine Action logo has re-emerged after years of obscurity.

The Movement Against Uranium Mining kept going until the 1990s, when it scaled back its activities. Uranium mining has continued to be highly controversial in Australia. Although several mines are operational across the country, uranium mining is banned in some states including Victoria, New South Wales and (since March this year) Queensland. In its own way, the Adderley Street mural is keeping up the fight. 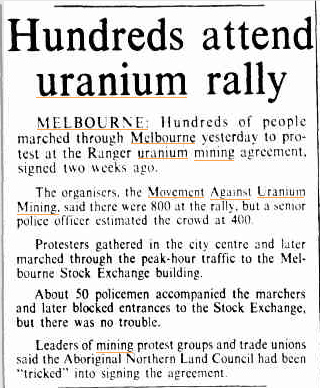 This article from solidarity.net provides great background on where the MAUM was coming from: ‘The 1970s anti-uranium campaign’

Thanks to Beth and John for their help with this story.