At the corner of Lennox Street and Rowena Parade is a Victorian shop (dated 1878) on which some very faded ghostsigns can be discerned. The words ‘General House Repairs’ are just about legible between the upper storey windows, and I could make out ‘Builders’ and ‘Carpenters’ above the ground floor windows, along with the now almost illegible name of the former owners, which appears to read  ‘ … ETT & SONS’. 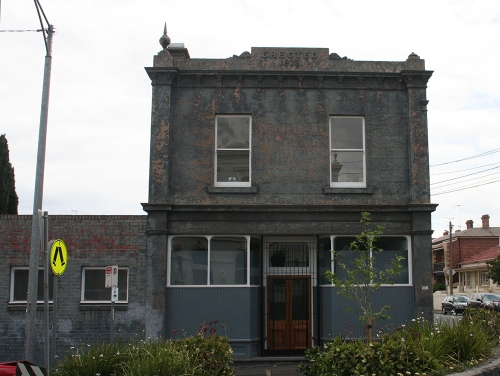 This ghostsign, ‘General House Repairs’ is in the final stages of its journey towards illegibility.

I checked back in some street directories, and found that at the turn of the century the occupant was George Pearson, variously described as a ‘bottler’ and a ‘spirit merchant’. By 1910 the building was occupied by John Wells, painter. By 1930, the business had become John Wells & Son, builders, who remained there until the 1950s. However, by 1960 the occupant was R.B. Hallett & Sons, builders.

Hallett is the name that is barely readable above the ground floor windows, which possibly dates from the 1950s or early 60s. However, it’s also possible that the ‘General House Repairs’ ghostsign is older, and dates back to the era of John Wells & Son.

Either way, there is renovation work going on so it’s possible that the peeling old paint will be refreshed some time soon, and the last trace of the business will be gone – but as their trade was house repairers, that’s probably fair enough.

A little further down Lennox Street, the delightful Hersh’s tailor’s shop can be found in another Victorian building at number 234. There used to be many of these tailor’s shops around the Melbourne suburbs, but few are left these days. 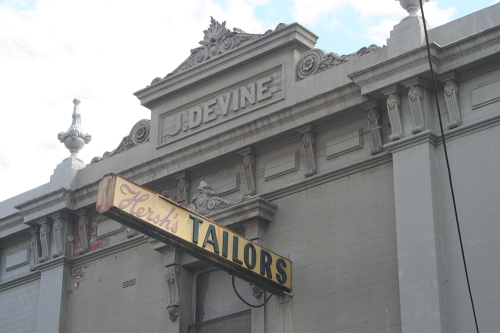 Hersh’s shop is something of a time capsule. In the window there are still some line drawings of fashion items. 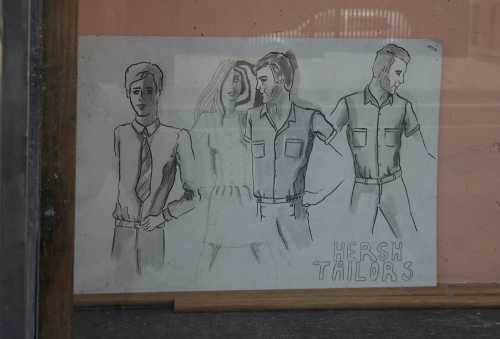 The door is a beautiful thing, with a retro floral blind, another drawing of fashion wear, and ‘Hersh’s 234’  in wrought iron lettering across the middle. 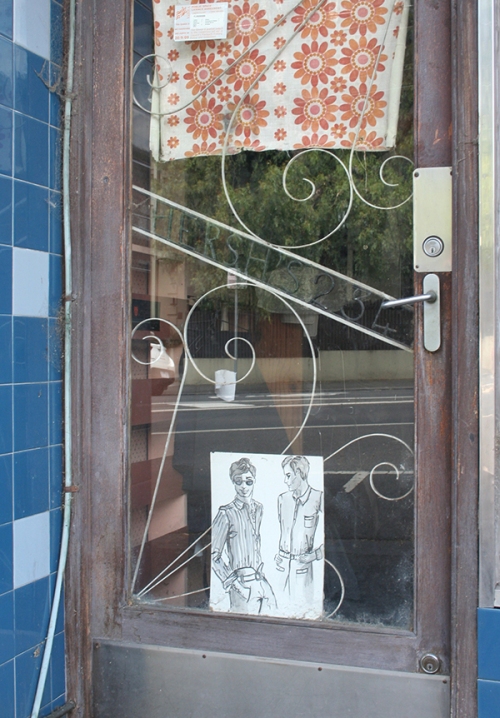 I don’t know how long Hersh was there, but he appears in my 1946 Sands & McDougall directory at that address, so over the years many of the local population must have been fitted out in his suits.  Hersh was tailoring until only a few years ago – I don’t know if he is still active today, but I hope so. The original owner of the premises was presumably J. Devine, whose name is carved on the pediment.

Moving away from Lennox Street and going up the hill along Rowena Parade, which becomes The Vaucluse, you enter a peaceful, leafy region of large, solemn-looking buildings in bluestone, cream and red brick. Up in this quiet lane are a number of buildings belonging to the Jesuits. You feel miles away from the bustle of the nearby retail streets, Bridge Road and Swan Street. I had no idea this place was here until I started exploring. Walking up the lane feels a bit like sneaking into a secret garden. Houses hunker behind dense foliage. Archways open onto silent courtyards. 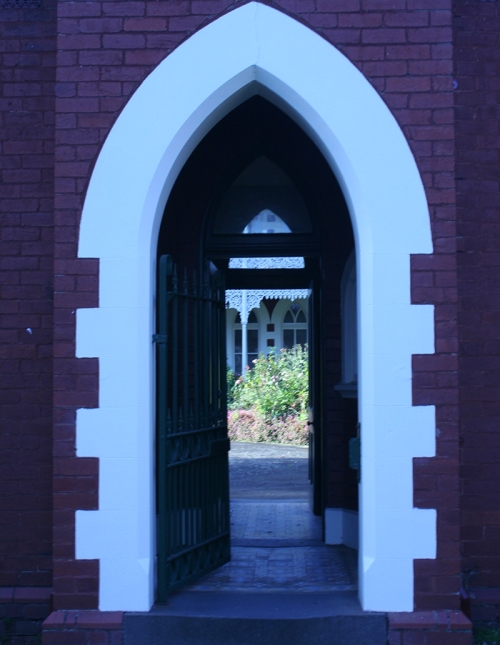 When you emerge from the Vaucluse onto busy Church Street, you can’t miss St Ignatius – which historian Janet McCalman calls “possibly the most splendid parish church in Melbourne”, at the heart of the Catholic parish of Richmond. It’s certainly a striking building, with a sandstone spire like a sharpened pencil, and it dominates the hill. All the hustle and bustle down below – once thick with factories, tanneries, shops and trades of all kinds – seems very far away. The churches have always had a knack of nabbing the best real estate. 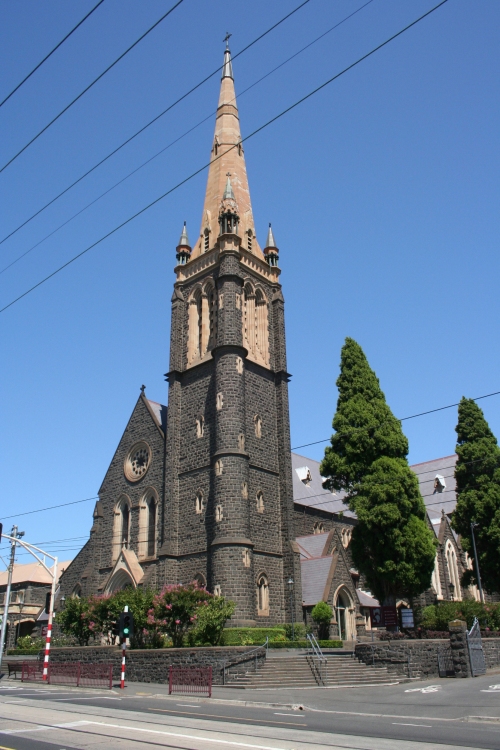 According to McCalman in her book about the history of Richmond, Struggletown, Father Flynn of St Ignatius “said prayers for the Tigers each week and unofficially canonized Francis Bourke, Richmond’s full back”. It must have worked since Bourke was noted for playing on miraculously with injuries that would have felled lesser men.

Just across the road at 293 Church Street there’s an impressive slash ostentatious mansion, built in 1888, at a time when Melbourne was awash with money from the land boom. The building is in good condition externally, and is certainly a massive statement in a neoclassical style. 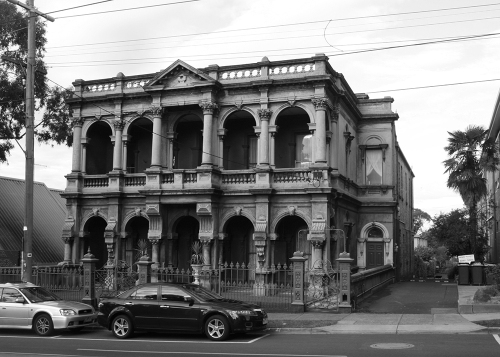 The original owner was Dr Joseph Lalor, (the son of Peter Lalor, leader of the Eureka Stockade rebellion) and the word ‘surgery’ is visible in stained glass above the side door. A doctor who could afford a house like this in a location like this must have been doing pretty well. It was still used as a dispensary in the mid-20th century, according to Sands & McDougall. According to legend, the house is said to be haunted. 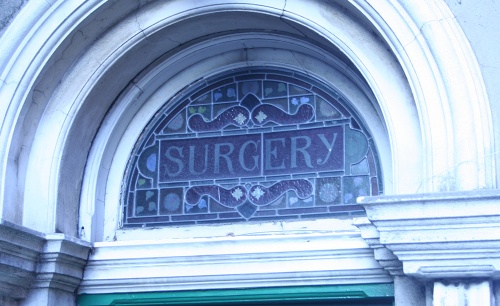 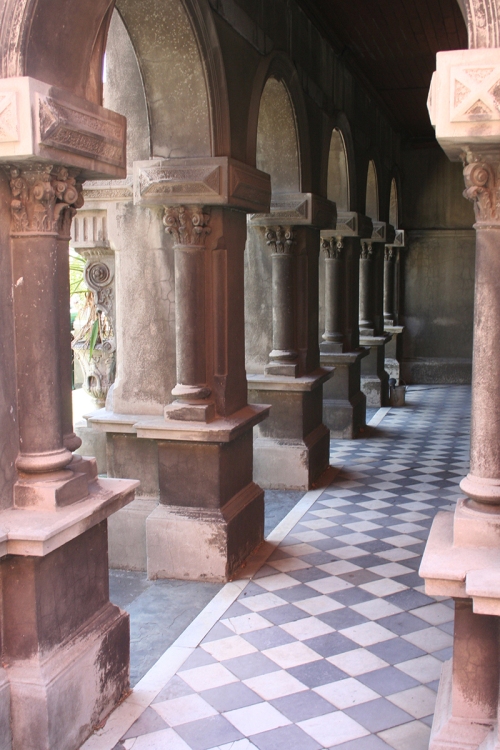 Colonnade and terrazzo at the front of Lalor House. Look at me, it says: I’m a man of wealth and culture. 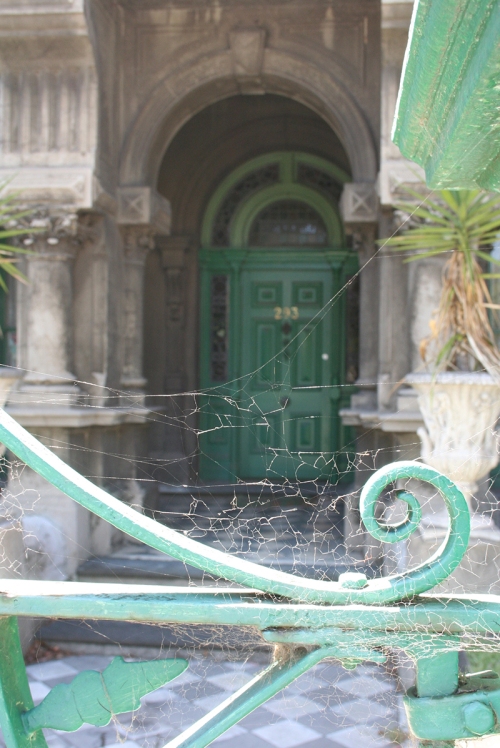 This is me getting arty with a shot of the front door through a spider’s web.

Of course, many people today still like their house to make a statement – this one can be seen on nearby Alfred Street, though it’s a bit more friendly. 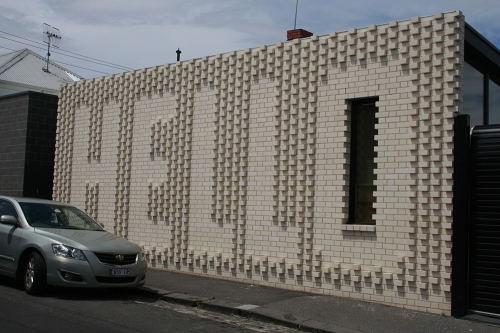 Wandering around this part of Richmond today, you hear only the sounds of a quiet suburban afternoon – a dog yaps, there’s the splash of someone washing a car, distant music inside a house, the drone and buzz of insects, the whirr of a chopper overhead.

It’s the practice in Melbourne suburbs for council officers to come around every now and then to chop off tree branches, ensuring that they don’t touch power lines. This basic topiary results in the trees being forced into quirky and surreal shapes – this one reminds me of a creature out of Dr Seuss. It’s part of the unofficial art of the suburbs. 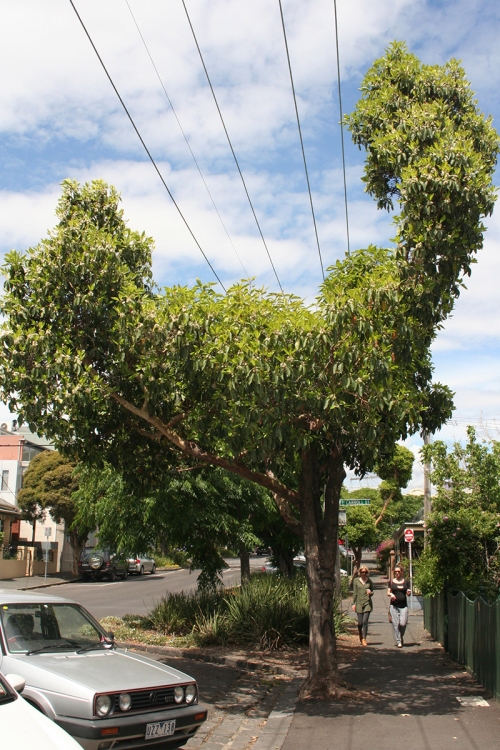 Tree sculpture by a secret cell of surrealists in the City of Yarra arborists department.

Art of a different kind is visible a little further south, where street artists including Makatron have created a giant mural of a whale next to the station. 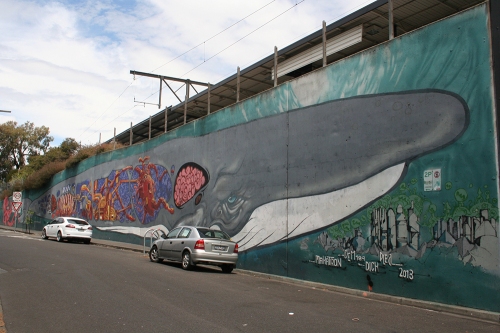 Then you reach the superb brick complex of the Australian Knitting Mills on Stewart St, established in 1910, sold to Holeproof in 1955, and recently converted into apartments. 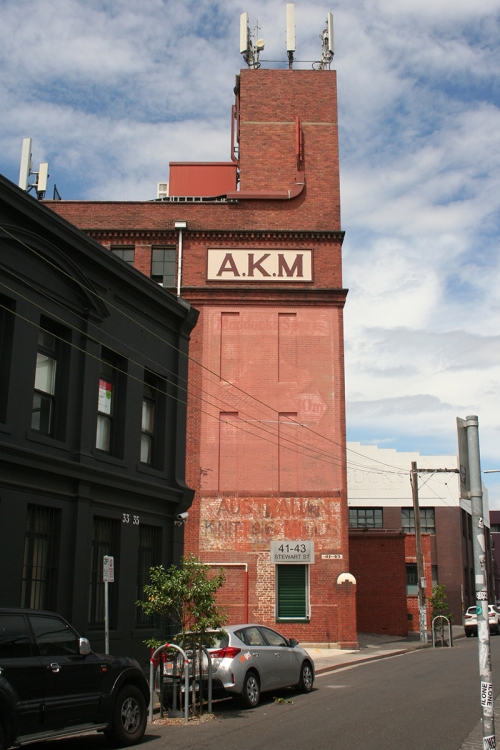 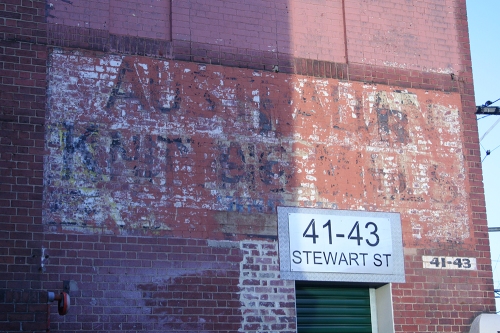 This was a major employer in Richmond in the first half of the 20th century. For many years it was the home of popular Australian garments such as Kookaburra underwear, Golden Ray lingerie and Klingtite swim suits. You can still see ghostsigns around the complex for some of the products that used to be made here.

Layers of ghostsigns at the Australian Knitting Mills complex 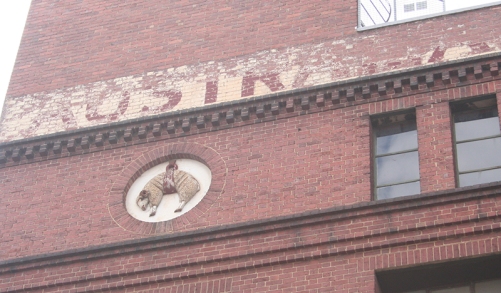 A tribute to the humble sheep. 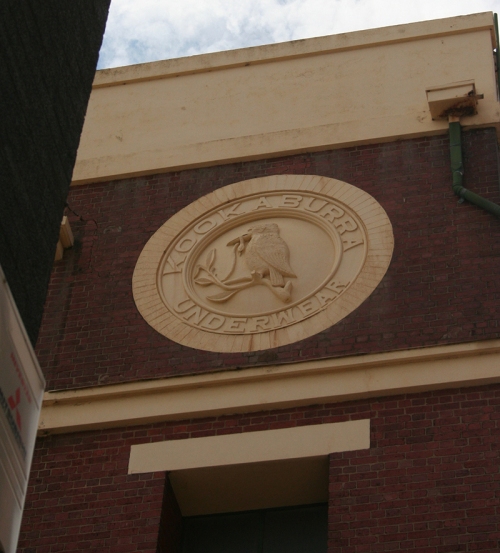 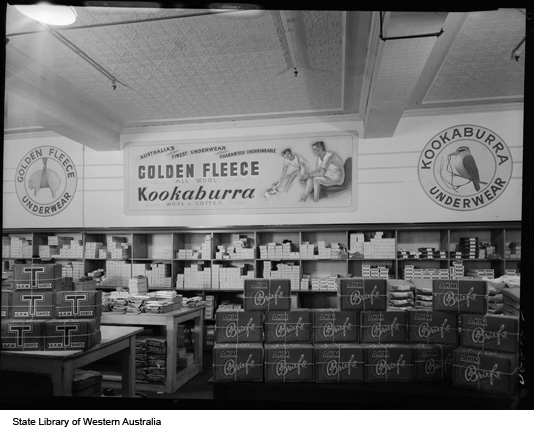 A display of Kookaburra underwear, 1955. 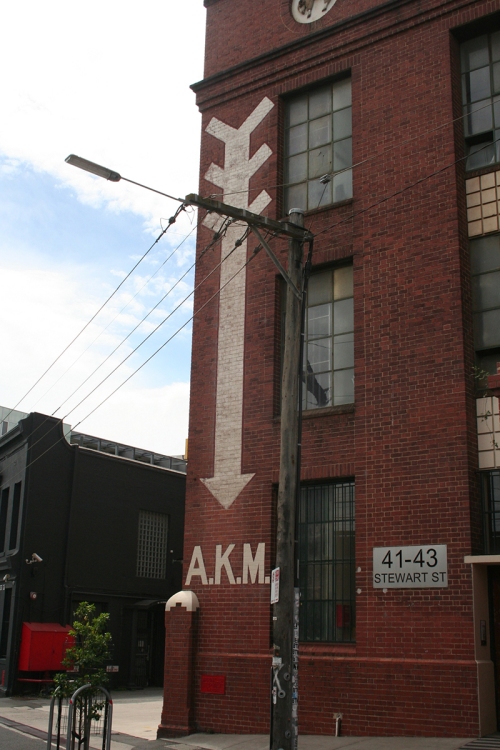 Probably the largest painted arrow I have ever seen, and still very visible from the train line.

The company has an important place in Australian consumer law through the famous case of Grant v Australian Knitting Mills Ltd (1936), also known as “the case of the itchy undies” in which a South Australian doctor sued the company because his new woollen underwear caused serious dermatitis. In a story that reads like a real-life version of The Castle, Dr Grant was prepared to take the case all the way from the Supreme Court of South Australia to the High Court, and ultimately to the Privy Council in London, where he was triumphantly vindicated. The case was critical in establishing the law of negligence in general and manufacturer’s liability in particular. You can read more about Dr Grant’s underpants here.

So next time you exercise your rights as a consumer, thank the itchy Dr Grant. He may not have wanted to be remembered that way, but we cannot always choose our place in history. 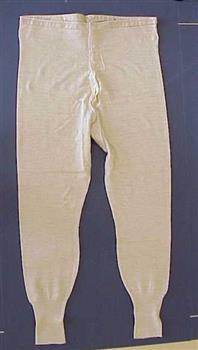 Map of the walk so far on Melbourne Circle

For more about the history of this area, including some great old photos, check out the Richmond and Burnley Historical Society.

The ghosts of Lalor house: see this article from The Age, February 2016.