When people settle in a new country, they employ various strategies to make themselves feel at home. The Anglo settlers of Melbourne in the 19th century tried giving the suburbs names from the old country like Richmond and Box Hill; they surrounded themselves with the names of  famous English poets in Elwood, where almost every street is named after the likes of Tennyson, Milton and Shelley, and writers of other nationalities (including Australian) hardly get a look in. Another way of creating the illusion of home is through architecture.

In the suburb of Albert Park, close to the boundary with South Melbourne, you come across a residential square that seems to have been picked up and teleported through time and space. St Vincent Place looks as if it belongs in some BBC costume drama, with hansom cabs rushing through the streets and Sherlock Holmes about to welcome a visitor to the door. Even the park over the road, with its flower beds and oak trees, looks more English than Australian.

The square was planned in the 1850s and the first houses – including splendid mansions and terraces – were built in the 1860s, on the site then known as Emerald Hill. Its designers were the surveyors-general, first Andrew Clarke and then Clement Hodgkinson, who was also responsible for other notable bits of Melbourne greenery: Fitzroy, Flagstaff, Edinburgh and Treasury gardens. The St Vincent Place gardens are still very pleasant today – you can lounge in the shade of many well-established trees or enjoy the bowling greens and tennis courts (as long as you are a member of course) but it’s the buildings that grab your attention. The whole point of St Vincent Place is to impress. Probably the most striking is Rochester Terrace.

The grander mansions and terraces would not be out of place in a fashionable London square, which was precisely the intention when they were built.  The names alone tell you that – Buckingham Terrace and Balmoral Terrace convey regal aspirations. In the gardens there’s a memorial to one of the fallen of the Boer War – a British imperial adventure – and the streets around are named after British naval heroes like Nelson. The whole caper was basically an imaginative exercise in reconstructing a posh bit of London in the southern hemisphere (a bit like the 1930s apartments of South Yarra that attempted to emulate exotic Hollywood).

The square was laid out and built in the aftermath of the Gold Rush, when the city was awash with money and keen to demonstrate that in wealth and ambition it could emulate the old country. The builder of Rochester Terrace was W P Buckhurst, a farmer’s son from Rochester, Kent, who became a successful auctioneer and property developer in Melbourne. But the prosperity of Melbourne wasn’t based only on gold. By the late 19th century the city had a more complex economy with a substantial manufacturing base and a large professional class, many of the most successful of whom owned properties  on St Vincent Place. Among them was Thomas Guest, the biscuit magnate whose factory in North Melbourne is still adorned with his name (I wrote about him here).

St Vincent Place continued to be an elite address into the 20th century, occupied by successful businessmen, lawyers, doctors and architects, a place of ballrooms and musical soirees. It had a few wobbles in the post-World War Two period when some of the big houses were divided into boarding houses (shock! horror!) and even brothels. But it wasn’t long before St Vincent Place became fashionable again. By 1981 The Age was trumpeting it as the ‘Smartest new address in town’, the kind of place where you might bump into a model walking her dog. (Article here).

In the article, the residents commented smugly on the number of ‘rubberneckers’ who came along to take photographs. These days they have wandering bloggers clogging up the streets as well. It’s certainly worth a visit, as probably the most distinctive and intact Victorian square in Melbourne, though if your income is anything like mine you won’t be buying there any time soon. But at least you can enjoy the gardens.

St Vincent Place is not the only evidence of the Victorian era in this part of town, though it is the most opulent. Victoria Avenue, the spine of Albert Park, has many Victorian and Edwardian shops, though today most of the occupants are nail spas, pathology places and bistros.

I spotted this ghostsign on the wall of a Victorian shop at 124 Victoria Avenue. The name is gone but the business advertised is ‘Painter, paperhanger, signwriter’. Presumably this business provided a service to the houses in the neighbourhood – perhaps he even put up the wallpaper in some of the houses in St Vincent Place.

Another trace of old England survives at the top end of Victoria Avenue, on Dundas Place – the signage of the London & Lancashire Insurance Co, a very long-standing company founded in 1847. The building itself has an Edwardian look. Maybe the occupants of St Vincent Place used to get their fire insurance here. 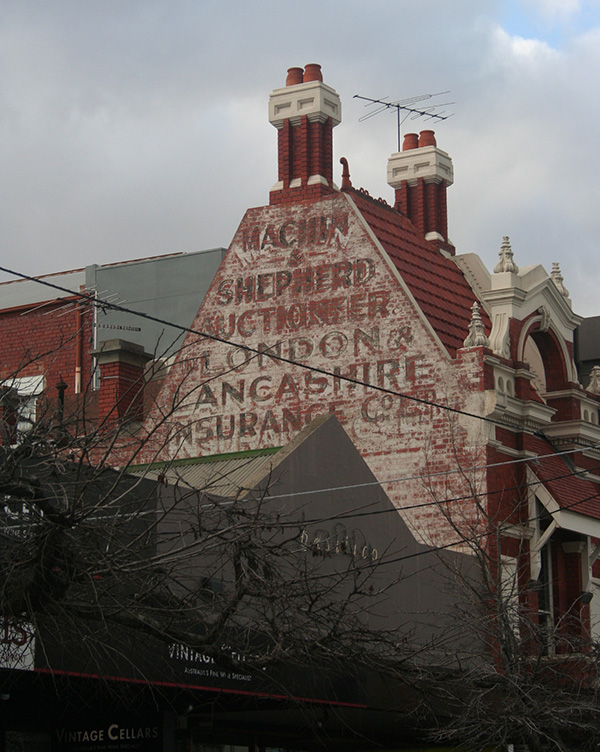 Getting away from the British theme for a moment, Victoria Avenue has another ghostsign of more recent vintage. Ansett was an important Australian airline from the 1930s until its collapse in 2001. It was known as a major sponsor of sport – including a pre-season footy competition. The company became Ansett Australia in 1990, so this sign presumably predates that.

The most charming ghostsign of Albert Park, though, is entirely home grown. The totally wonderful Suit Hospital, on Cardigan Place, offered invisible mending, apparently by smiling robots. Who could resist? 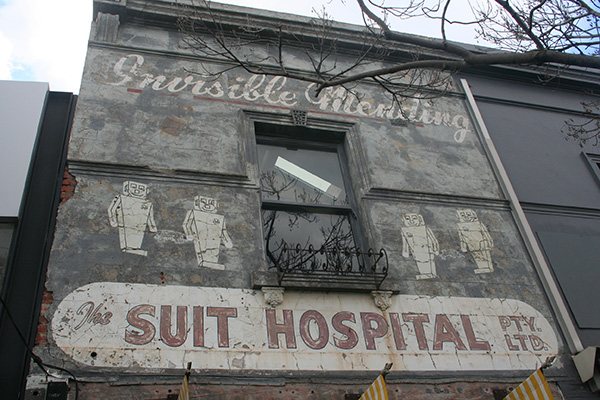 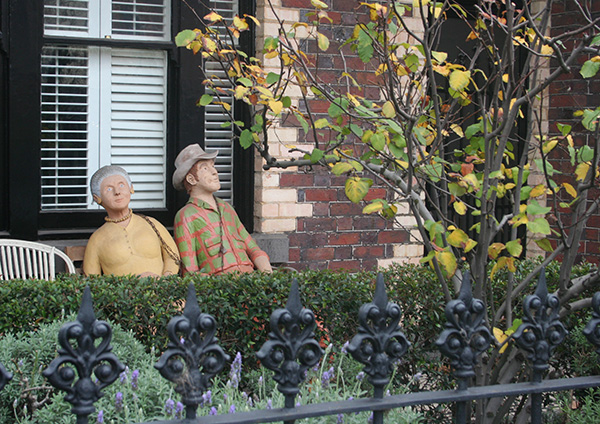 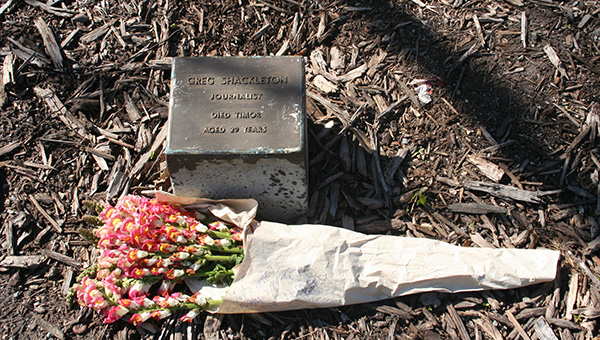 A tribute in St Vincent Place to Greg Shackleton, the Australian journalist murdered by Indonesian soldiers in 1975.

Thank you to the National Trust (Victoria) for assistance with this story.