I find cemeteries fascinating. Every gravestone is a mini-narrative – a person’s life story in its most concise form, often no more than dates of birth and death and perhaps the name of a spouse or relative. If you are a writer looking for inspiration you could do worse than wander around a cemetery and let the tombstones be triggers for your imagination.

Leaving Williamstown, we walked from the Bristol Hotel along Champion Road, Newport. To our left was the Williamstown cemetery, one of the oldest in Melbourne, established in the 1850s. Close to the road are graves dating from late Victorian times. Many of them are not in good repair: tombstones broken or askew, or sinking into the earth like foundering ships – since we’re in Williamstown, the metaphor seems appropriate.

We found a tomb with the names of six young children from the same family, who all died within a few years of each other during the 1860s, carried off at intervals of a year or so. It’s a snapshot of family life – and death – in Williamstown in the mid-Victorian era. What diseases carried those children off, we wondered? And how could the parents bear it?

Sometimes a tombstone carries a brief, tragic narrative about a single death. We found one on a broken stone. ‘Adam Phaup, Drowned, Christmas morning 1870. Aged 42 years.’ On which local beach did a Christmas morning dip end in tragedy?

Towards the western end of the cemetery are the more recent graves, many of them Italian, and these are in far better condition, bright and clean and laden with flowers. A chorus line of Christs stands out against the sky. 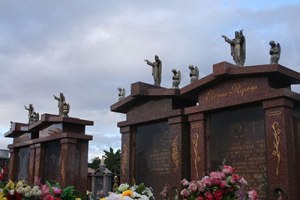 On our way out we passed a tombstone in memory of local artist Joan Curtis. It’s touchingly adorned with a real teapot and the outlines of two cats. There’s a homeliness to this which tells you more about the person than religious iconography. The Egyptian pharaohs used to travel into the next world accompanied by food, jewels and servants, so why not a teapot and cats?

We left the cemetery, crossed Champion Road and found ourselves outside the old Newport railway workshops. These were originally built in the 1880s for the construction and maintenance of railway rolling stock and continued in operation until 1992. At its height, some 5000 people were employed here. There are several notable Victorian brick buildings – sheds, a station, a clock tower and a beautiful circular water tower.

Today, walking along Champion Road,  there’s not much evidence of the work that used to go on: you see a row of rusty old sheds with shattered windows, piles of masonry and rusty bits of machinery. It appears to be typical abandoned industrial premises, neglected and forlorn. We turned down a side road and found ourselves looking through wire at a second graveyard, this time of rolling stock: rusty wheels, graffitied carriages and multifarious bits of abandoned machinery. Among them were these strange red engine components – I have no idea what they are – whose almost-human faces seemed to be expressing surprise at the state of things.

But then we turned into an open gateway and found ourselves at the back of the sheds, where we realised that the place wasn’t abandoned at all. Soon we were walking among beautiful restored steam engines and railway carriages.  The sheds, which we had taken to be abandoned, are now occupied by railway societies, including Steamrail Victoria and the Diesel Electric Rail Motor Preservation Association, which use the workshops to lovingly restore old engines. A couple of guys in overalls, passionate and vastly knowledgable about railways, invited us into the sheds for a look around. Teams of volunteers are working on locomotives and carriages from the early to mid-20th century, restoring them to perfect working order.

It was heartening to see an old industrial site which, rather than being converted into apartments or shops, is used for something in sympathy with its original function. It feels more respectful to the people who used to work here. Thanks to these volunteers, resurrected locomotives from Newport railway workshops are once again transporting paying passengers around Victoria. Follow the links below and sign up for a nostalgic trip.