The walk continued from the intersection of Union Street and Epsom Road in Ascot Vale, heading east and south into Flemington. Flemington has a plethora of buildings of all eras, from the fading Victorian shops of Racecourse Road to the rather totalitarian Melbourne Gateway created in the 1990s. But two starkly contrasting bits of architecture particularly interested me as I walked through it. 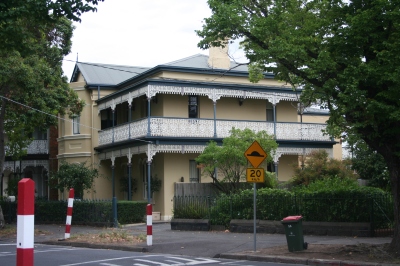 One of the well-kept big Victorian houses on Wellington Street 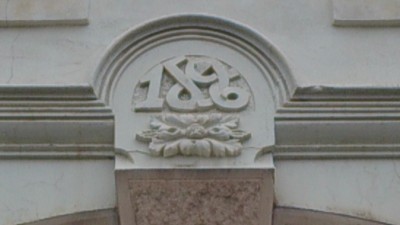 Fancy Victorian styling of the year ‘1896’

Between Union and Ascot Vale Roads stands  the Ascot Estate, built in the late 1940s-1950s by the Housing Commission on land that was formerly the Ascot Racecourse. The area must have had racecourse overload: there were others at Flemington and Moonee Ponds. It seems odd that there should have been a third racecourse so close to Flemington, and local residents were complaining for years that the land could be put to better use. (For more detail see this historical account of Ascot racecourse).

After the war, facing a housing crisis, the state government compulsorily acquired the land from its owner, the tycoon and political powerbroker John Wren famously the subject of Frank Hardy’s novel Power Without Glory, but that’s a whole other story too long to tell here. The racecourse land became the site of an interesting experiment in public housing. To see how the landscape was transformed, I recommend you check out these wonderful contrasting aerial photos of Melbourne in 1945 and 2015.

The words ‘Housing Commission flats’ bring to mind the massive towers built in the 1960s, but the Ascot Estate is made up mainly of small brick blocks of two or three storeys. The architect, Best Overend, was an advocate and pioneer of flat-building in Australia. According to Philip Goad’s Melbourne Architecture, the Ascot estate shows “Overend’s interest in finding a humanistic basis” to communal housing. Certainly the scale of these flats looks more humane than the concrete towers of a few years later.

Wandering around the estate today, along those streets with names evocative of war heroes – Churchill, Blamey, Dunlop etc – it still looks much as it must have done 60 years ago, with the addition of a few satellite dishes. There are plenty of green areas and trees, a community centre and legal service, playgrounds and a skate park, and forests of that peculiarly Australian icon, the Hills Hoist. The Hills Hoist was first manufactured in 1945 and evidently a lot of them made their way here. They may not look like anything special, but they work. They even appear on roofs, some bare and autumnal, others blooming with multicoloured garments, a man-made roof garden. 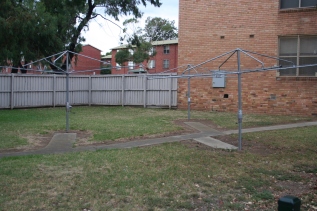 I walked through the estate on a Sunday afternoon and it’s a quiet, tranquil environment – so quiet, in fact, that it’s good to hear a few kids playing on balconies, a guy kicking a football against a wall, a family farewelling visitors, a bloke pushing an aircon unit outside.  I wonder, though, what the people who live here – many of them from parts of the world with a lively outdoor culture – make of the quietness. I would like to have seen senates of old folk debating the state of the world, teenagers shooting hoops,  parents and kids making the most of the playground. I imagine these trees and gardens were put here by Overend and the planners because they wanted stuff like that to happen. But there’s precious few people about, even though hundreds of families live here.

That said, it feels like a safe and peaceful place, which would be good enough for many, especially if you have come from a war zone. And the flats still look good after 60 years.  They may appear plain and functional but the architects had a clear vision and it worked.

The same can’t be said of one of the noted Victorian buildings found on Wellington Road, the famous Flemington post office, completed in 1890. This is apparently one of Barry Humphries’ favourite buildings in Melbourne and, like Humphries and his on-stage persona, it’s over the top but memorable. The architecture is of a type known as “stylistic eclecticism”, i.e. it’s a hodge podge. It’s certainly not the only building of that type around Melbourne, many of them built in the 1880s-90s during an era known as ‘the Battle of the styles’. 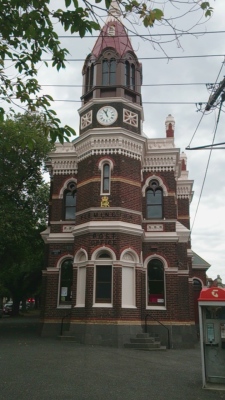 I’m sure lots of people besides Barry love this building but when you look at this Dame Edna of architecture you can’t help thinking that its creator, public works architect JR Brown, had no vision beyond grabbing the eye of the beholder with whatever features took his fancy. There’s a clock-tower.  Ornamental brickwork. Stained glass windows with Australian flora and fauna.  You might expect that sort of thing in one of the mansions built by some nouveau riche businessman, but this was a public building. Why did a post office need to look like a Venetian palace?

It’s the opposite of the housing commission flats designed by Overend, not just stylistically but philosophically. Overend had a practical function in mind and the flats seem to be good places to live, even if they slip past the eye rather than catching it. In contrast, there’s no reason to stick a tower on top of the place where you buy your stamps, except to show off.  I suppose civic pride had something to do with it – that ‘Marvellous Melbourne’ mentality that made the Victorians so determined to prove they were living in a great metropolis. Meanwhile, they didn’t get around to building a sewage system until the late 1890s.

‘Receiving pillar’, complete with crown, outside the post office.

The receiving pillar is now sealed up and purely ornamental.

Detail of the letterbox

Does this romantic, impractical, ornate edifice really work as a building?   If so, is that because of its indifference to function, or in spite of it? I’m not sure. But whatever Barry’s opinion, although I admit the post office’s strange charm,  I think Overend’s is the more significant achievement. 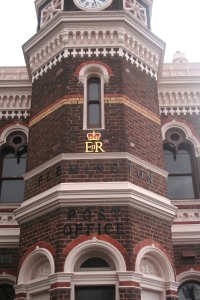 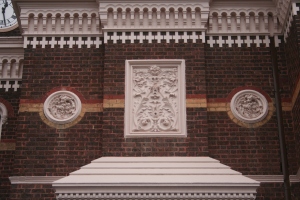 Map of the walk so far on Google Maps