We walk from the West Gate bridge north up Hyde Street. Ahead of us, to the right are the big white drums of yet another refinery, Mobil this time (Caltex and Shell are  behind us, in Newport.)  Opposite Mobil is a Singaporean power company. There’s industry all the way up this road, and signage warning of hazards of various kinds. Not really a place that you’d expect to find a nature reserve.

However, the Stony Creek Reserve is here,  an area of reclaimed wetlands, a small ribbon of green running alongside the creek. We take a left and head into it.

One reason why Yarraville developed as an industrial centre is because it is close to the point where the river Yarra merges with the river Maribyrnong, making it possible for goods to be loaded, unloaded and transported by water, and also for industrial waste to be disposed of without anyone worrying about the environmental consequences.

Another reason is that much of the west of Melbourne is built on a plain of basalt, known as bluestone.  Anywhere you walk around the inner western suburbs, as soon as you step onto a park or reserve or the banks of a creek, you can feel lumpy outcrops of bluestone beneath your feet.

An English migrant in the mid-19th century – William Stone – realised that this part of the colony of Victoria was sitting on abundant bluestone, and set up his business on Hyde Street in the 1850s. This became one of the first of many quarries which soon appeared all over the inner west.

In 1861 at least 20 per cent of local male workers were quarrymen, and there were more than a dozen quarries in the vicinity. The bluestone was used for many major public buildings, such as St Paul’s Cathedral and Pentridge Prison, countless roads, laneways and private houses during the 19th century.

After the quarries had fallen into disuse, they were abandoned to fill with water and rubbish. Aerial photographs from 1945 show abandoned quarries pock-marking the inner western suburbs.

Stony Creek, which flows through the suburb, was used as a drain by the nearby tanneries, meatworks and glue works in the late nineteenth and twentieth centuries.  The area was an environmental disaster.

In more recent times, some of the old quarries have been converted into parks. Part of the Hyde Street site was reclaimed and turned into a nature reserve in the 1990s by the Friends of Stony Creek and local council.  The group continues to be active, planting trees to increase the diversity of indigenous vegetation and improving the habitat for native animals. There are quite a few waterbirds and hundreds of newly planted seedlings. 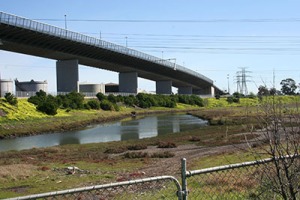 Following the creek around, we make our way through some three-metre high reeds,  then under the railway bridge, and continue beside the creek as it winds through the golf course and approaches Williamstown Road. A century ago there used to be a ford here, where in 1919 a milkman and his horse drowned in a raging torrent. These days the creek is confined within a concrete canal. We follow it under Williamstown Road, and emerge on the other side, at the point where cars and trucks come off the Westgate Freeway. Here we part company with Stony Creek to continue our journey north, up Williamstown Road, towards a couple more sites redolent of Yarraville’s industrial past.

Some of the historical information in this post was found in Frances Smith’s Yarraville, village and club and Meyer Eidelson’s, Stony Creek: the journey of a waterway and its people,  both available from the Footscray Historical Society.

Map of this walk