Meet Michael Isaachsen, director of the Melbourne Museum of Printing. This unusual museum is a personal collection of printing machines, typefaces, equipment and artefacts, only a tiny fraction of which is on public display at the current premises, 266 Geelong Road Footscray.

Melbourne Circle wasn’t sure the museum was open on the Sunday afternoon we rocked up to find it locked, although the opening hours are advertised as 2-5pm on Sundays. But a handwritten sign supplied a mobile number, and when we called it Michael emerged smiling from somewhere at the back to let us in.

Michael is passionate about printing and will give you a personal history of the subject from Gutenberg to the present day. After an hour with him you will know the origin of the terms upper and lower case, be familiar with ‘galleys of leads’ and know what a ‘slug of type’ and a ‘type foot’ is. You will see cases full of typefaces – Michael has about 1000 – Bodoni, Garamond, Times, Umbra, Old English and many more. Many people now know these names from their computers but few will have actually held in their hands the tiny letters that make up a metal typeface, or seen an alphabet of letters and punctuation marks set out in a case. (Compositors traditionally worked from two cases of letters, one above the other. The capitals went in the upper case, the small letters in the lower case. That’s a factoid it’s really nice to know.)

A case of metal type.

One of the prime objects in the collection is this 1849 Albion printing press, imported from England. You raise and lower the plate by pulling that lever on the right horizontally across. It’s just one of nearly 200 printing machines owned by Michael, most of which are in storage as there is limited space to display them. 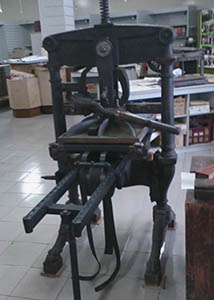 Michael’s obsession with type and printing began when he was nine. In the 1970s he was the last student of RMIT’s type founding course, where he learned to make metal type, and acquired the printing equipment when the course closed down. He accumulated more items from newspapers and printing companies as they went out of business or adopted new technologies. People still contact him with equipment to add to the collection. Someone recently donated this beautiful set of wooden type.

The museum is also a working type foundry, one of the last places in Australia where documents can be printed using moveable type. As such it is a popular, if niche destination for designers, artists, writers, art students and the like. It’s a hands-on museum – during Melbourne Circle’s short visit, Michael showed us how to typeset by hand and create a ‘slug’ of type – that is, a word created out of hot metal (an alloy of tin, lead and antinomy.) We chose to set our name in 16 point Garamond.

Full-day workshops are available at which you can learn to set type and print by hand, after which access to the studio is available for those wishing to pursue their own small printing projects, such as invitations, posters, even books. These are some examples of work done in the studio. 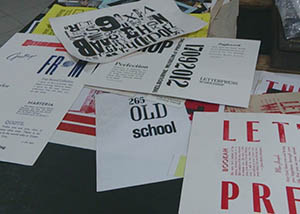 The museum is one man’s labour of love, and surviving this long has been a challenge. It has been through several incarnations, forced closures and changes of address since its first opening in 1990, but somehow it hangs on despite receiving no government funding or private sponsorship. Michael hopes a print-loving philanthropist will step in to keep the museum alive.

In the meantime, though, he enjoys passing on his knowledge to the visitors and students who are keen to learn about this vanishing art. Michael is on a noble mission to keep alive knowledge of the traditional craft of printing, with a vast amount of knowledge kept in his head. As with all personal collections, the questions are: What happens to that knowledge, and the collection itself, in subsequent generations?

But for now, if you like printing, design or books, or old-fashioned craftsmanship, you should go to the Melbourne Museum of Printing. Just check the opening hours first.

And while you are there on Geelong Road, don’t forget to look next door at the Apex Belting factory, a lovely moderne building with a superb neon sign. In his brilliant book Characters, signage historian Stephen Banham suggests that this is the oldest continuously operating neon sign in Melbourne, if not Australia. It has been there since 1940, a familiar landmark of the western suburbs. 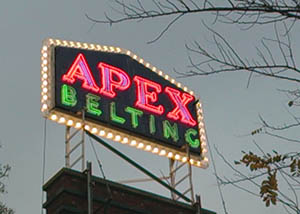 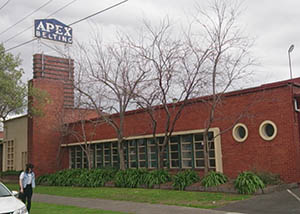 Where is the Melbourne Museum of Printing?