A definition of the vague term ‘psychogeography’ is “the study of the specific effects of the geographical environment … on the emotions and behaviour of individuals”.

One way of exploring the psychogeography of a city or suburb is to simply drift through it, trying to sense the moments when the atmosphere changes and your mood alters correspondingly.

I felt such a shift as I walked along Holmes Road, Moonee Ponds. It was around the moment when I spotted the signage for the Chinese restaurant. The words ‘Eat Here or Take Away’, shaped out of some soft and impermanent substance, looked as if they had been half eaten themselves.

Have they been consumed by birds? Or eroded by rain, wind and neglect? Either way, this sign marks a dividing point between two halves of the suburb. It’s not a division that appears on any map, but you can feel it. On one side – to the west – are the elegant Victorian mansions, the rose gardens, the fountains, the private schools, the polychrome bricks and iron lacework – above all, Park Street, described by orgasmic real estate agents as ‘a blue ribbon trophy street’. On the other, things are different.

It happens almost at the point where you cross the railway line and Holmes Street becomes Puckle Street, around Nailsland and Footspa. The move downmarket is confirmed when you reach the ‘adult boutique’, with its ‘Fifty Shades of Grey’ display, and a window full of saucy mannequins in leather harnesses. (A couple of doors down there’s a locksmith offering ‘keys cut while you wait’ – which could be useful in some bondage-related crisis).

And then you get to the other side of the tracks, and you’re in Puckle Street, which has definitely seen better days. Here the ambiance is of small businesses struggling for survival. There’s a Cash Converters, a Reject Shop, a $2 shop, op shops, discount chemists, and several places for lease. Yes, there are some decent cafes, and even a bookshop, god bless ’em. Overall, though, it’s not an attractive prospect, especially on a rainy Sunday. It’s the kind of place that Paul Kelly should write a song about. My heart was buckled on Puckle Street …

And yet, such a streetscape has its charm, and why is it that I instantly felt at home there? (The western side, in contrast, among the mansions, makes me feel somewhat uncomfortable).

Moonee Ponds contains some of my favourite ghost signs in Melbourne. This one, back on Holmes Street, is very weatherbeaten but you can just about make out the silhouettes of two grinning children’s faces below the olive-green speech bubble: ‘Say Marchant’s, please!’ Marchants was founded in the 19th century, although the lettering of this sign, I’m guessing, makes it more 1960s. 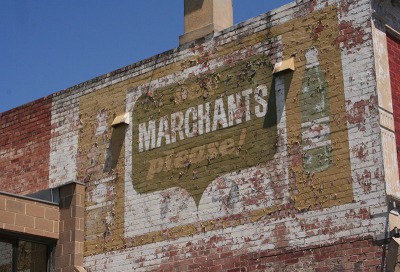 The next is even better – a beautiful, much-photographed ghost sign at 12 Margaret Street, visible from Moonee Ponds station. At the top it reads ‘W. Rayner, tobacconist’ above a Dainty Maid custard powder advertisement. Again, the faded beauty tugs at the heart. 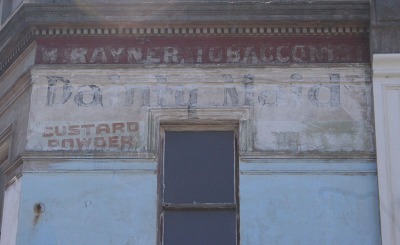 Delightful though she is, the dainty maid is not the only adornment of that building. When you look at the side wall there’s a groovy mural of a blue flying bird, a spaceman and a spaceship of aliens. The spaceman seems to be wearing flippers for some reason. 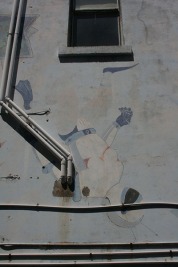 How did they land there, those space oddities, and when? Who painted them, and why? This mural looks as if it considerably predates the street art boom. Unlike the ghost signs, we can’t guess why the artist(s) chose this subject.  It’s not a particularly brilliant work of art, but it adds something to the building and I’m glad the subsequent owners haven’t painted over it. Perhaps a few decades ago, some time between the building’s last incarnation as a grocer and its current one as a restaurant, it was the home of artistic hippies. I have no idea but I’d love to hear the story of the mural, if anyone out there has any clues.

Nearby, some more recent and more polished street art appears on the wall of the Brotherhood of St Laurence. 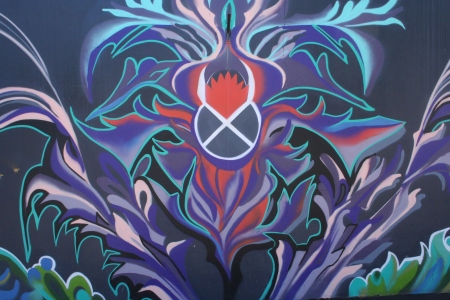 And further down at 60 Puckle Street, we find another small ghost sign reading ‘Fraser’s’ over the top of the words ‘Dairy’ and ‘Smallgoods’. According to my Sands & McDougall’s street directory, Fraser’s was at this address in 1946, though the shop itself looks Victorian. (Perhaps the ‘dairy and smallgoods’ sign was original.) 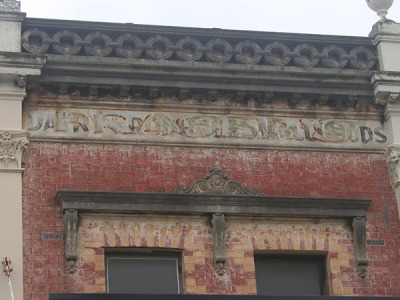 How should we read these eroded, faded signs and artworks – as symbols of impermanence and loss, or endurance and survival? They are, I think, both at the same time, which accounts for their bittersweet quality.

Looking at them, the observer is lost in time, disoriented, like a spaceman in flippers.