A walk down a commercial street, as opposed to an industrial or residential area, reveals a lot about how suburbanites choose to spend their free time. In suburbs that have preserved their older buildings, you also get a glimpse into the recreations and retail habits of the past. Richmond is a case in point – its major shopping arteries contain substantial Victorian and Edwardian street frontages, and if you raise your eyes from street level you see evidence of what people used to do when not at work.

A gateway stands at the western end of Victoria Street. It’s a tribute to the people who came here from south-east Asia in the 1970s and built new lives.  The influx of Vietnamese migrants in the 1970s effected a transformation  –  Victoria Street is rich in Vietnamese bakeries, cake shops, soup places, restaurants, grocery stores and herbal shops. 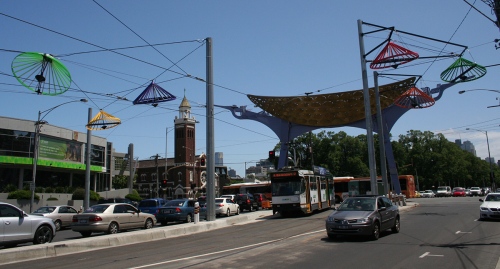 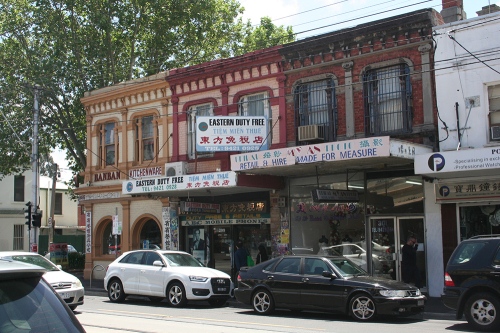 But it’s not really that great a change because this has always been a busy commercial street. The sense of bustle and activity has been constant since the mid-19th century, though the boot repairers, farriers and fellmongers have been replaced by wedding shops, karaoke bars, the odd ‘urban bistro’ and craft beer bar, and Loulou’s Relaxology Body and Foot Massage. 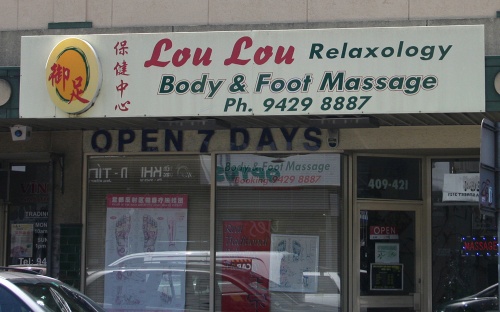 As is often the case on Melbourne streets, there is a mixture of architectural styles to be seen – this stylish moderne building, now a cafe, is at 323 Victoria St on the corner of Nicholson St. It was formerly the Duke of Albany Hotel. 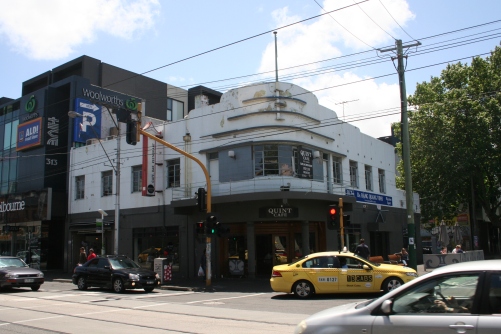 Another culture makes its presence felt at 50 Victoria Street, on the eastern wall of the Salvos building, where a faded character in huge blue bovver boots  is playing pinball –

– perhaps in homage to the character played by Elton John in The Who’s film, Tommy (1975). Elton played the champ who is defeated by Tommy, the Pinball Wizard. The film (directed by Ken Russell) came out in 1975 so the sign presumably dates from around that time.

Victoria Street is a good place to walk, with energy and variety and its own vibe. At the top of Lennox Street, near the intersection with Victoria Street, are some charming artworks by one of Melbourne’s best street artists, Be Free.

Turning right, I wandered south down Lennox St, passing a Victorian grocer’s shop (now occupied by a cardiologist and dermatologist), a Buddhist temple and the Housing Commission flats on my way towards Bridge Road. 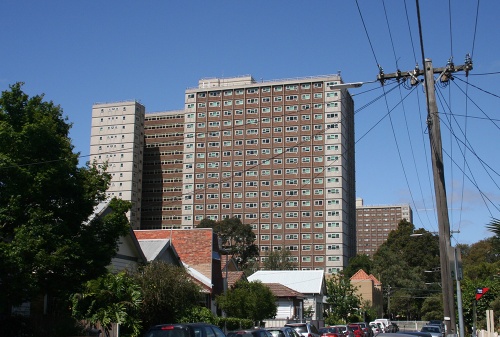 On Bridge Road, where the signage at ground level screams for your attention, you can also detect many traces of older enterprises – especially if you look up. At 46 Bridge Road I spotted a distinctive brick building, somewhat neoclassical  with beautiful art nouveau lettering: ‘Hairdresser’s – Lovell Bros – Tobacconists’ and the word ‘Billiards’ proudly inscribed on the pediment. This is the kind of place where I stand craning my neck for ages, amazed that everyone hurries past without stopping to admire it.

Come on, people! Look at that lettering!

It would have been an impressive local venue in its day, a place for the local lads to be billiards wizards (in those pre-pinball days), buy some smokes and get a trim when they felt like it.

I was keen to know how long Lovell’s was a landmark of the Bridge Road scene. According to Sands & McDougall’s street directories, the Lovell Brothers, hairdressers and tobacconists, were first here in 1901, probably the year the place was built. That fits with the art nouveau styling of the signage. By 1905, there was only one Lovell: W.E., a hairdresser. Both Lovells were gone by 1914, when a Timothy Gallivan occupied the property. The premises continued to be a hairdresser and tobacconist for at least a couple of decades after that, though – C. McInerney, hairdresser was here in 1935.  Oddly, though, I found no reference to the place being a billiard hall.

At 197 Bridge Road, on a small building painted black, you can make out two ghostsigns close together. The signage of the Metro Gas Company, which opened here in 1919, is still visible despite the repainting, and on the eastern wall of the building to the left, number 195, is the faded word ‘Dentist.’ This is my favourite kind of ghostsign – nothing showy about it, easy to miss, but telling the story of a building.

The first mention of a dentist at this address in Sands & McDougall was in 1914, when Wm. A Cook, dentist was at number 195. I fancy it was he who had the sign painted – the lettering has a pre-war look, but of course I can’t be certain. After Wm Cook was extracted from the premises, another dentist, E.J. Adam took over in the 1920s, and was still there in 1946, and possibly later.  Did Squizzy Taylor get his gold teeth done here, I wonder? 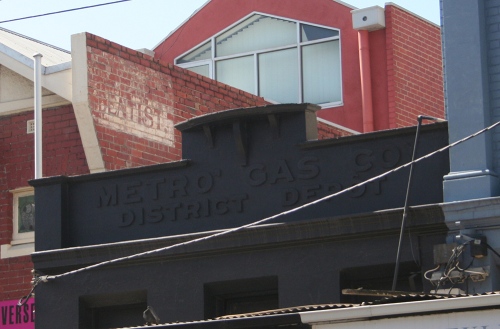 Bridge Road received a boost when tramlines were laid in 1925. It was probably handy for Squizzy, providing another means of escape (besides his tunnels from Goodwood Street, which I wrote about here). More mundanely, people could have hopped off the tram to get their teeth fixed by E.J.Adam, or have a haircut at the former Lovell’s building. 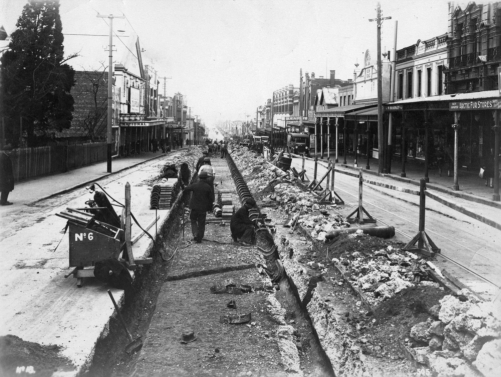 Often I walk through parts of Melbourne that seem to have radically transformed over the years, in appearance and in spirit. But today the commercial streets of Richmond are still full of people hurrying to shop, eat, get their hair done or just hang out in a congenial environment, whether at Lovell’s hairdressers or Loulou’s relaxology. In in that sense, perhaps, little has changed here.

The walk so far on Google Maps

For more about the history of this area, including some great old photos, check out the Richmond and Burnley Historical Society.