One of Melbourne’s most spectacular buildings, Newman College at the University of Melbourne, was the work chiefly of three people:

The young American had arrived in Melbourne in 1913. He was a utopian. A modernist. An idealist.

He came from Chicago, and had worked with the great Frank Lloyd Wright. In 1912 he won a prestigious international competition to design a ‘virgin city’ as the home of Australia’s parliament. Canberra was to be planned to the smallest detail, in perfect harmony with its environment. The architect and his wife – who drew the brilliant plans – came to the new country full of hope.

But their every move was blocked. Bureaucrats, ministers, rival architects white-anted them at every turn. Their ideas were too radical, too different. The “Yankee bounder” was abused in Parliament, accused of “grand theorising, moonshine and dreaming.” Not one of his buildings would ever be built in Canberra.

But he also had a practice in Melbourne. Staid old Victorian Melbourne, city of solid businessmen, ornate mansions and worthy institutions. Was Melbourne ready for him?

One man was – the formidable Archbishop, Dr Mannix, leader of the city’s Catholics. Mannix wanted to build a college for Catholic boys, providing access to a university education, so they might become captains of industry, lawyers, doctors, prime ministers. He raised $100,000 to build it. And hired the young American, a Protestant, as the architect.

The project’s biggest donor was a Sydney lawyer named Donovan, a crusty 73-year-old with ideas of his own about architecture. In return for his money Donovan wanted a medieval Gothic pile – something like the ‘stately shrines of Oxford’ – he drew sketches adorned with castellations and gargoyles to show what he meant.

But the young American didn’t do Gothic. He didn’t do pomp and tradition. He didn’t do gargoyles.  He wanted something modern, unique. He drew a sketch of his idea on an envelope during a train journey. Instead of the verticals of Gothic, the design was all horizontals, like the prairies of the American mid-west. Two long low arms joined up at a domed rotunda. Donovan was horrified when he saw it. “I do not know the architecture, which may be ‘American’. Personally I prefer Gothic.”

But the committee bravely over-ruled their irate benefactor and accepted the young American’s plan – enhanced by his wife’s ‘dazzling pictures’ of the design.

Donovan fought tenaciously for months. The American’s plan was socialistic. Mahommedan. It looked like a circus, a gas-holder, a freak. The design of the student quarters would encourage secret drinking, night-walking, and gambling. The luxury would turn the boys’ heads to evil. It was wrong in every way. But he didn’t pull out his money.

The critics were active on other fronts. They called the building a railway station, a Luna Park, a picture palace. They condemned the use of reinforced concrete, suitable only for chicken houses. They said it would have as little lasting quality as cubist paintings. It was a disgrace to Australian architecture.

But Mannix didn’t waver – he seldom did – and thanks to a successful fundraising campaign, the building went ahead. The college opened in 1918, and the first 56 students took up residence.

Almost 100 years later, the building still astonishes. Its spires, peeping into the northern end of Swanston Street, somehow look both ancient and futuristic at the same time; the cloisters are serene and graceful. The adjacent residential colleges are pleasant enough, but wear their Anglo influences as a badge of honour; Newman is something unique. Mannix didn’t just get a college for his boys: he got a building for the ages.

Donovan refused ever to visit it.

View of Newman College dome and spires from Swanston Street

The 12 smaller spires of the reinforced concrete dome represent 12 apostles, with Christ in the centre.

The circular dining room beneath the dome.

Light pours in through the dome into the dining room.

View from the grassy quadrangle of the college. 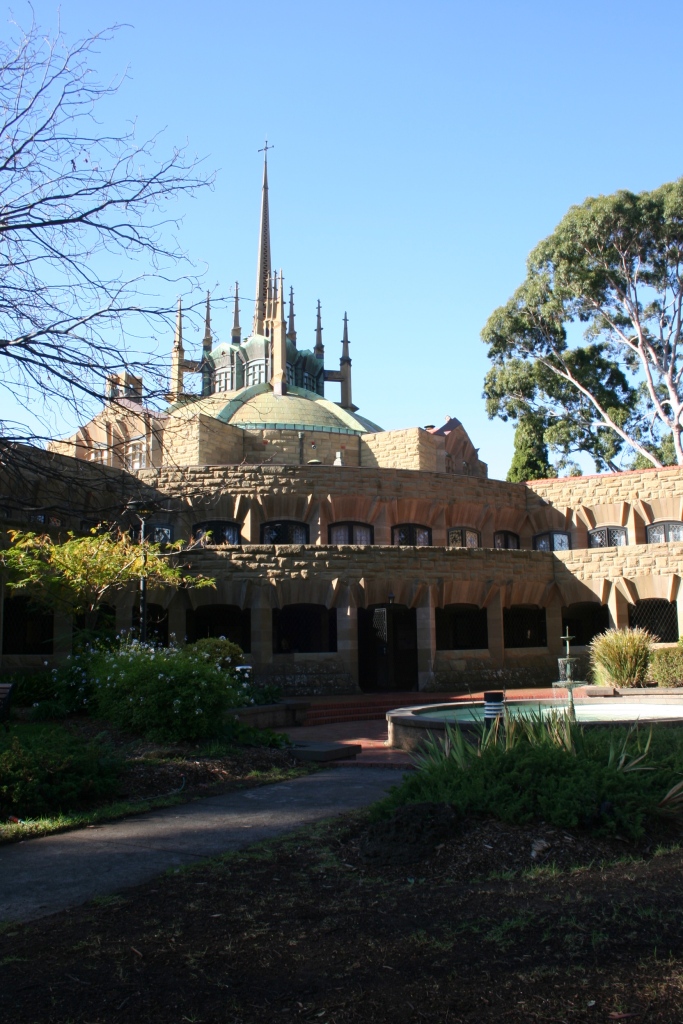 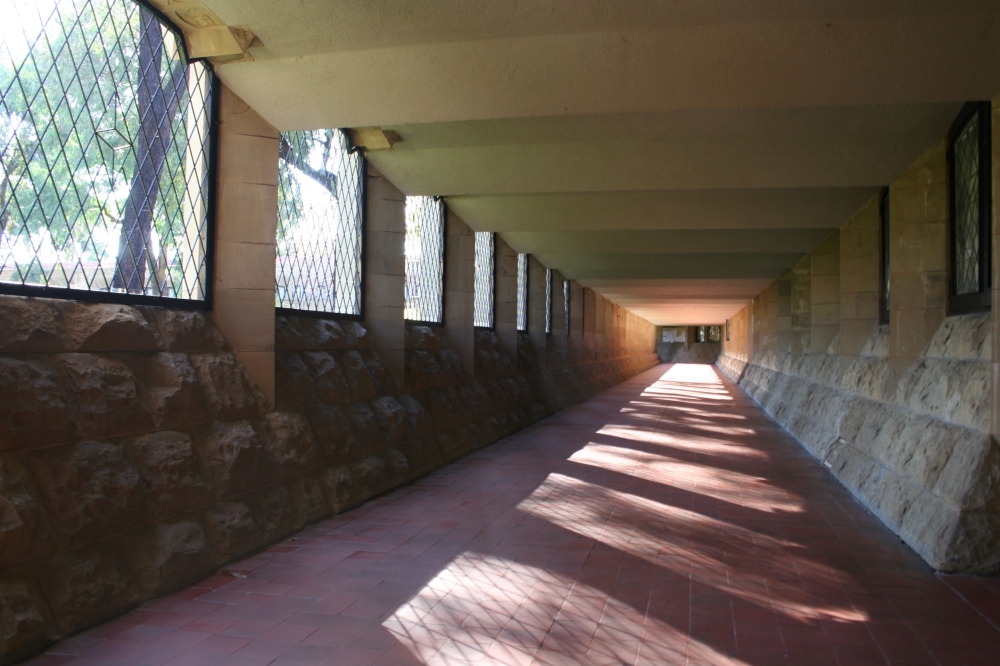 The long low wings of Newman College are occupied by students. 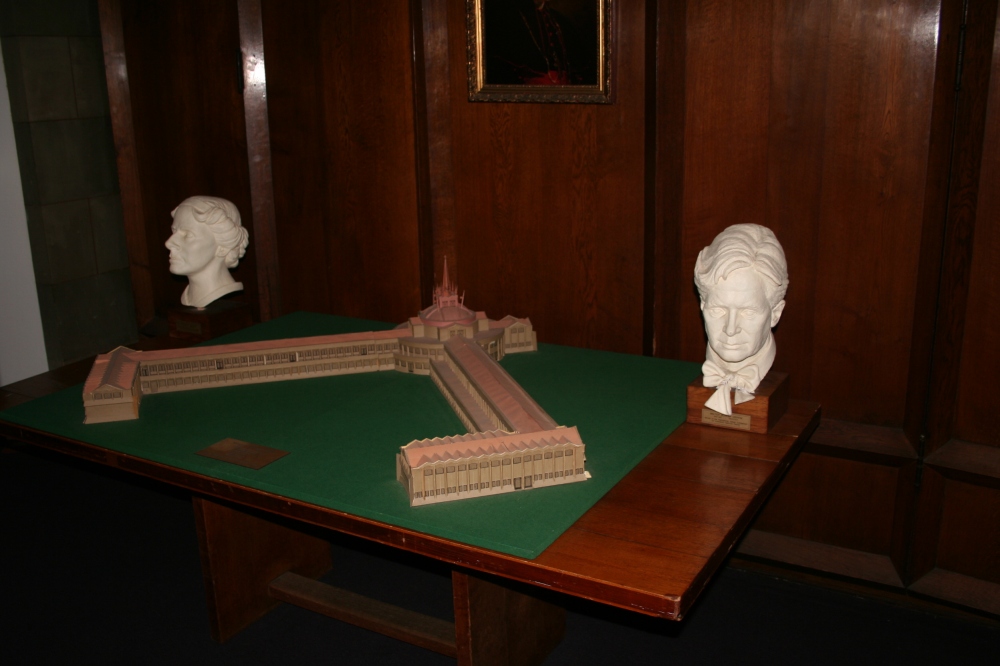 The busts of architects Marion Mahony Griffin and Walter Burley Griffin can be found inside the college, along with their model of the design.

For a detailed account of the design and construction of Newman College – as well as the Griffins’ other achievements – see Alisdair McGregor, Grand Obsessions: The Life and Work of Walter Burley Griffin and Marion Mahony Griffin which is the main source of information in this piece.

Thanks to my friend Peter Craig for first showing me Newman College.