To walk around Collingwood, more than perhaps any other suburb, is to be made aware of change.

Changes in society, architecture, industry. Changes in where we live, what we wear, what we drink.

There used to be dozens of factories here. Boot and shoe manufacturers. Wool carders, spinners and scourers. They’ve gone, to be replaced by fashion wholesalers selling imported threads.

The massive Foy and Gibson buildings on Oxford Street are home to apartments and coffee houses, rare and fine wine merchants.

Spaces get reinvented, sometimes imaginatively. Those trains on the roof of an Easey Street building? A hip new burger bar, paying homage to graffiti culture. (Here’s how the trains got there).

Shops and factories are recycled into art galleries and independent radio stations.

There are nostalgia shops where you can buy bits of old industrial signage and footy cards with long-moustached footballers.

Massive construction sites mean more apartments to come. Who will occupy them?

More traces of Victoriana linger in 19th century houses, with the fancy patterned polychromatic brickwork that the Victorians loved. Like many inner suburbs, there was a building boom here in the 1880s, as the Melbourne dream of home ownership took hold.

Foy and Gibson was one of Victoria’s largest employers in the late 19th and early 20th centuries. Its activities can still be seen in signage around the top of the Oxford Street buildings: ‘Wool scouring’ ‘Engineering machine shop’ ‘Wool spinning’ ‘Wool carding’ ‘Dye house’ ‘Bleachery’.

Mark Foy was an Irish draper who set up a drapery business in 1870 in Smith St.  In 1882 his son Francis took over the business, and William Gibson came in as Francis’ partner. Francis left for Sydney where he set up the famous department store, Mark Foy’s. Back in Melbourne, Foy & Gibsons expanded to include extensive manufacturing as well as retail – they had a department store in the city, on the corner of Bourke and Swanston streets, in the mid-20th century. 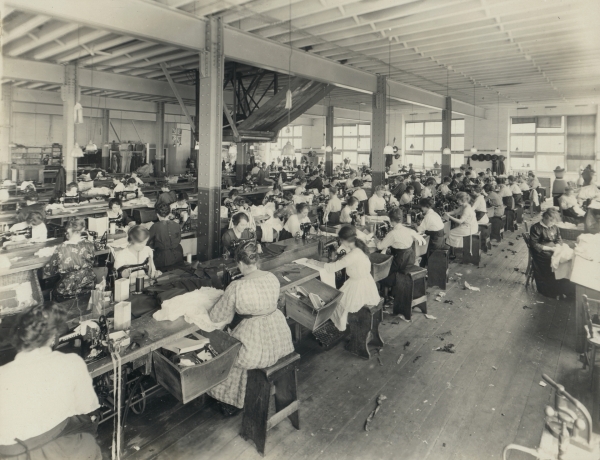 Women working in the ‘Whitework and Underclothing’ section of the Gibsonia Mill at Foy & Gibson, 1922. Source: University of Melbourne’s Foy & Gibson archive.

Foy & Gibson was taken over by Cox Brothers Australia Ltd in 1955, which in turn was liquidated in 1968. (There’s a Cox Brothers ghostsign in Brunswick Street, Fitzroy.)

There’s a ghostsign on Greeves Street with layers of names. ‘Kent Equipment’ appears to be the most recent. Below it you can make out the words ‘Sturtevant pneumatic tubes and cash carriers’. There’s an old phone number: 11200 Central. 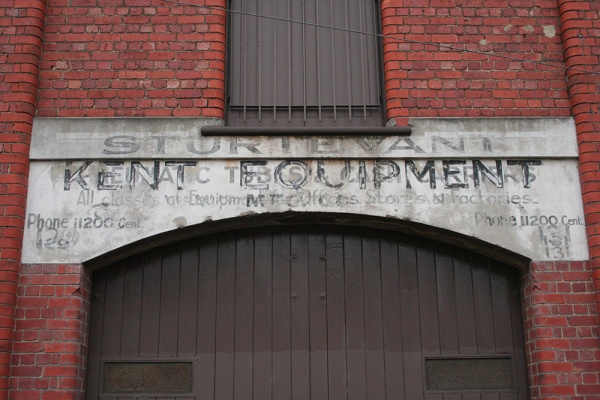 Pneumatic tubes were a popular way of sending messages over short distances in the mid-20th century. You would put your message or article into a small cylindrical container, and send it off via a network of vacuum tubes. Do any readers remember them? Many department stores used to use the pneumatic tube system – perhaps Foy and Gibsons. Here’s an advertisement from 1936, but they continued to be used well after that. I’ve heard they’re still in use in some hospitals and banks.

Collingwood was notorious in the early 20th century for characters like John Wren, who made a fortune running an illegal betting operation, or tote, off Gertrude Street. It was described by The Argus as “a mammoth and marvellous machine for meeting the needs of a large portion of the community, and at the same time evading the law.”

Wren’s activities live on in the name of one of Melbourne’s most famed music venues, The Tote Hotel. There are various rumours of connections between the venue (which used to be called The Ivanhoe) and Wren’s activities, and if you want to know more you should read Frank Hardy’s novel, Power Without Glory. What is certain is that The Tote has been one of the best places to see punk bands and the like since 1980. In 2010 it was announced that it would close, but a popular rally saved the venue, and you can still see many a proudly non-mainstream band there. It’s safe to say that Guy Sebastian won’t be on the bill any time soon.

While the walls of Collingwood are heavily populated with reminders of the suburb’s industrial past, there are loads of more recent additions in the form of street art, some of it spectacular.  The most famous is the Keith Haring mural on the wall of Collingwood Tech. 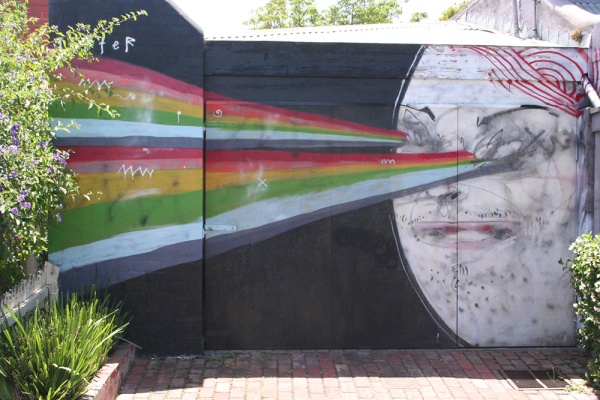 Collingwood is one of Melbourne’s richest areas for suburban exploration.  Many traces remain of its various incarnations and fascinating layers of history – photos of a few of them appear below. Hopefully the new developments will not obliterate them.

Leaving the suburb and heading home, on Victoria Parade I was delighted to see the faded remains of an old friend – a ghostsign for Dr Morse’s Indian Root Pills. I have also seen the good (but non-existent) doctor’s pills advertised in North Melbourne, and wrote about them here.

Some ghostsigns are simply inexplicable. 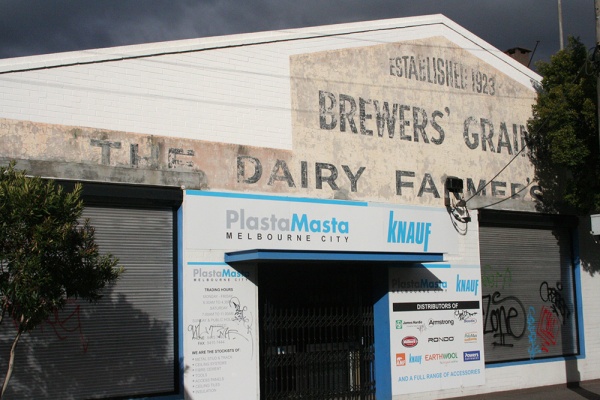 Trains on the roof in Easey Street. 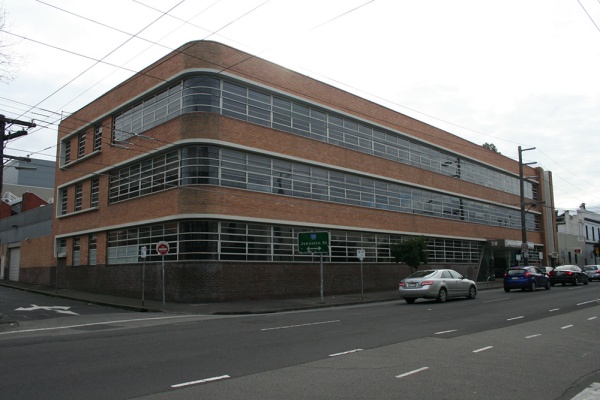 Collingwood Technical School, a fine example of streamlined moderne architecture, designed by Percy Everett in 1945. A few weeks ago I walked past another of Everett’s educational buildings, the former Essendon Tech. 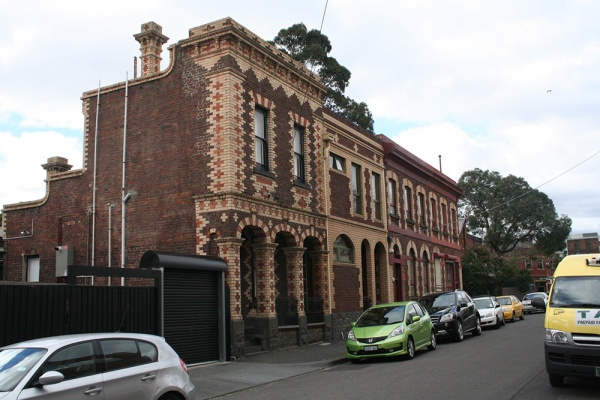 Polychromatic brickwork on a Victorian terrace.

These days the fashions are imported, not manufactured here. 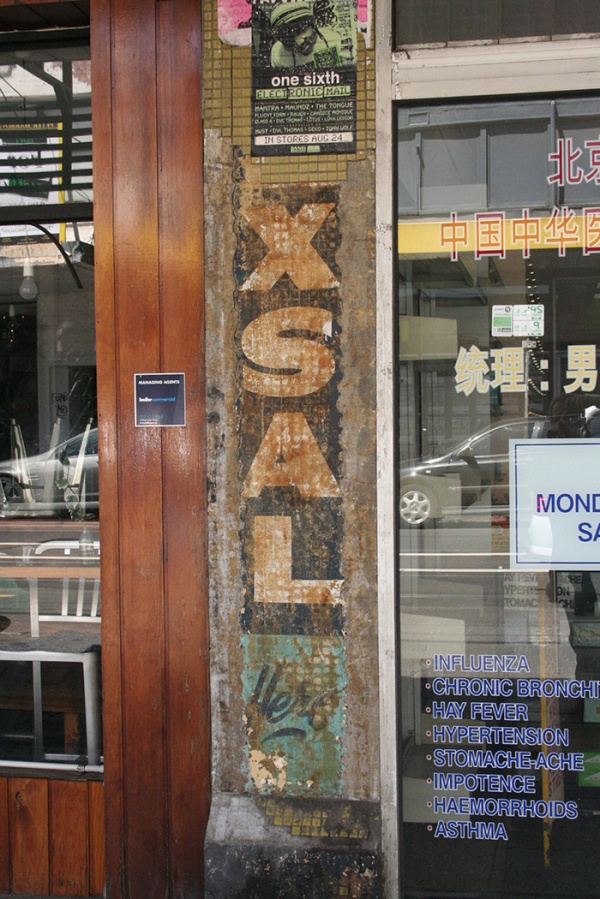 You could get –XSAL here. But what was it? Any ideas?

For more on Collingwood, check out the excellent Collingwood Historical Society.