Back in the early 90s, I worked as a teacher of English to people who had lost their jobs because of the restructuring of the economy. The idea was to retrain former workers from the TCF (textile, clothing and footwear) industries, who came from very diverse cultural backgrounds. Even then, manufacturing was in drastic decline. Back then, I didn’t have much idea how important footwear used to be in Melbourne’s economy. If you want the evidence of that history, suburbs like Clifton Hill are a good place to look.

Like its neighbouring suburbs of Collingwood, Abbotsford and Fitzroy, Clifton Hill was home to a remarkable concentration of boot and shoe makers, as well as hat makers. The building that’s now Schotts Emporium on Hoddle Street was once the Clifton Shoe Company, as you can see if you duck around the back and look up. It was one of dozens of shoe factories in the neighbourhood. 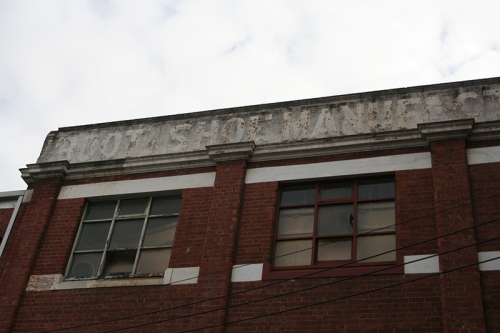 Heading east off Hoddle Street and picking up Noone Street, we caught sight of a fine-looking building in the Federation ‘blood and bandage’ style. These days it’s apartments, but on the top of the building is the old signage of a dye works.

That wasn’t its original purpose, though. For many years this was another shoe factory, as you can tell from a couple of ghostsigns on either side of the front door. 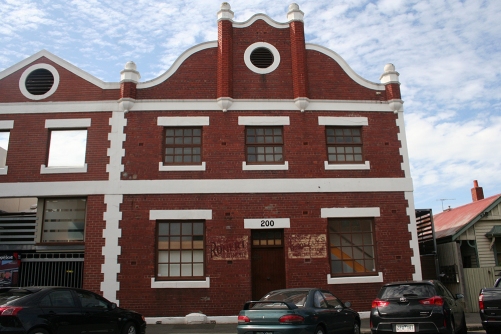 The building at 200-206 Noone Street was built around 1912 for Puttifoot and Bloom, boot manufacturers. (Is it just a coincidence that people in the shoe business often have the word ‘foot’ in their names? There is a ghost sign in the city for a shoe repairer called Barfoot.)

This sign appears on Ridgeway Place, on the wall of the Melbourne Club, in the CBD.

By 1927, the factory had changed hands and was Blackman & Rose, shoe manufacturers. It hung on until the 1950s, then became a mattress factory, and by the 1970s the premises belonged to the Synthetic Dye Works – as the signage on top proclaims.

Check out this link for a fantastic picture of workers inside one of the old Clifton Hill shoe factories, Llewellyns, circa 1920. The comments are worth a read too.

Ronert and Dr Kielly’s were brands of shoe popular in the 1930s and 1940s, presumably made by Blackman & Rose. Here’s an ad from 1943, when Ronert ladies’ shoes cost 23 shillings and sixpence:

And here’s a bit of promotion for Dr Keilly’s nicely named ‘arch-rest shoes’:

Dr Kielly joins the list of probably fictional doctors whose names still appear on walls around Melbourne, lending their prestige to long-gone products – the non-existent Dr Morse, of the eponymous Indian Root Pills, is another. (I have another appointment with him very soon.)

The shoe factories, of course, are closed these days, the result of changes to the economy that rapidly shifted Melbourne from a manufacturing city to the place of apartments and latte that we have today. With that change, it’s not just jobs that are lost, it’s the knowledge that went with them. How many people could make a shoe today? The names of the various associated trades have vanished from our vocabulary. Who knows what a ‘stuff cutter’ is, for example? 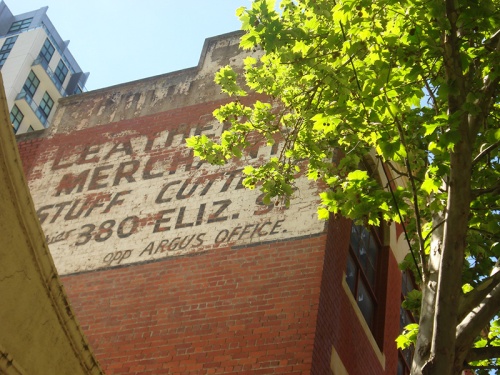 This ghostsign for leather merchants and stuff cutters – who made parts for shoes – is on A’Beckett Street in central Melbourne.

Not far away, on the corner of Groom Street and Alexandra Parade East, Clifton Hill, is a very faded ghostsign advertising two erstwhile Melbourne newspapers: The Argus and The Australasian. They are both famous names in Australian journalism, though The Australasian ceased publication in 1946, The Argus in 1957. This sign dates from well before that, I’d guess.

‘Advertise in The Argus and The Australasian’

While Clifton Hill used to be one of the most industrial suburbs of Melbourne, it also borders the Merri Creek close to the point where it flows into the Yarra river. Take only a few steps (in your comfortable Dr Kielly’s arch-rest shoes) and you find yourself among trees and bushland, immersed in the sound of bird calls and the noise of water flowing over Dight’s Falls.

We headed south down Trenerry Crescent, under Alexandra Parade and into Abbotsford. I’ve driven over this bridge many times, en route for the Eastern Freeway, but never walked under it before. And I’ve never really been aware of the beauty of the river down here.

Clearly it’s not a secret, because hundreds of walkers and joggers and cyclists are taking advantage of it on a Sunday afternoon, as they should. Still it seems a surprising blessing to find such a tranquil green place close to the heart of the city. We saw blue wrens darting about – at least, having no birdwatching credentials, I guess that’s what they were. A lizard, or skink, was sunning himself on the path, indifferent to us. The constant chiming of bellbirds mingled with the swoosh of traffic along Alexandra Parade, as it must once have done with factory sirens and industrial machinery.

The view is enough to make a real estate agent drool, and riverside apartments have sprung up on Trenerry Crescent, marking another step in the region’s transformation from an industrial heartland into a residential paradise for the upwardly mobile.

It used to be that the well-heeled moved far away from the industrial heartland. These days, though, the boot’s on the other foot.